Free Agent (This is not the story you think it is)

So a few weeks ago my darling agent of nearly two years decided to retire, and upon hearing the news I found myself sobbing in a hotel bathroom (see my blog about college road trips, zombie apocalypses, the highly over-rated Amish, and tour guides at Princeton who stretch the truth). But this story is not about that.

Sure, I could bore you with the gory details of my freak-out, which involved blubbering into my cellphone to my dearest writing friend, saying over and over, I can’t DO this again (meaning, cold-querying agents while simultaneously submitting stuff myself and collecting inevitable rejections), but whispering it, so my son who was watching Star Wars with his best buddy in the other room wouldn’t overhear and think his mother had lost her mind when we still had miles to go and many more colleges to visit and hear chirpy barely out of their teens tour guides relay fun hyperbolic facts about eccentric scientists and their allegedly visitable labs.)

What I really want to talk about is this great book I read, This Is Not the Story You Think It Is, the heartbreaking and surprisingly funny-at-times memoir by my new hero Laura Munson. My rational, logical son would likely disagree with me, but I believe that books (and people) have a way of popping into your life just when you most need them. Example: I met the dearest writing friend when we were standing in a Port-a-potty line at a writing conference. And I discovered Munson’s memoir at a used bookstore while I was gliding by the memoir/biography section on my way to pick up every book in the Ender’s Game series for said logical, rational son. (He wants to reread them all. But he doesn’t want to buy them new and put money into the pockets of an author he disagrees with. See HIS blog on the subject, immediately preceding this entry.)

Munson is cool. I knew this from the very first page of her book. “You might think all this would find me in a place of intense panic,” she states (upon hearing her husband say that he no longer loves her) “but I’m choosing something else. I am choosing not to suffer.” Turns out that Munson had an epiphany the week before this potentially earth shattering news. She’s a writer. At that point in her life she had written FOURTEEN unpublished books, and she was getting tired of that fact. Tired of having to tell people she was a writer then having to add that, no, they couldn’t buy her books at a bookstore. Tired of writing and writing, and never seeming to get anywhere with it. She comes to the conclusion that pinning her success and happiness on something out of her control is a ridiculous waste of time, and she decides that she will embrace this bit of wisdom: the end of suffering happens with the end of wanting. She says this twice. The end of wanting. Which was helpful to me. I had to read the statement twice more. And it hit me that I’m tired of wanting too.

Yeah. So it annoyed Munson too. But then she gets the horrifying news from her husband about not loving her anymore and the real bottom drops out of her world. Head still spinning and heart breaking, she wonders if she can put her new found epiphany about choosing not to suffer into practice. The man is clearly having a mid-life crisis. Maybe she can just step aside and let him have it. In the meantime she won’t freak out about it. She’ll take her pleasures where she can get them. And when he’s done, he’ll either come back to her.

Or he won’t. Not something she can control either way. The book is the four and a half month true story of how she coped. The irony is not lost on Munson that it becomes her first published book. Strange thing, fate.

Self-pitying digression: I liked having an agent. I’ll admit it was for mostly lazy and vain reasons. Lazy, because I really really really hate the work involved in writing pitches and query letters and synopses. And I hate studying the market and keeping up with submissions and (ugh) rejections. Having an agent meant I could devote all my time to writing. She took care of the irritating details. She absorbed the blows of the rejections, which she was kind enough to call, “passes.” I can see that I was probably a fool to put all this stuff on her. Especially because now I’m a little hazy about where my manuscripts are and what kind of editorial feedback I really got. (I do have a nice agent at the same firm who’s taking care of this during my transition into free agentdom. Last night she forwarded me a ton of correspondence so I got to see bam bam bam all of the dreaded passes in one big soul searing dump. Serves me right.)

The vain aspect comes into it because I liked saying, “I have an agent” to people after they asked me what I do. ("I'm a writer and I don't have any books published yet, but I have an agent" was my standard line.) An agent is an outward symbol to the mostly disinterested world that there’s SOMEONE out there besides relatives and dear friends who recognizes that what you write is worthy (ie, publishable). I had a professional, book-loving person in my corner. An advocate. A cheerleader. Rah Rah Me.

Vain. Like I said. And now as I find myself slipping into boo hoo self-wallowment (I know. Not a word) I say a giant Thank You to Laura Munson.

Thank you for baring your soul and writing your book, Laura. (Can I call you that? I feel like you’re my long lost twin except you’re way prettier and you went to boarding school and you ride horses and live in Montana and you’re now a best-selling author.) Thank you for giving me the nice psychic smack that I needed when I needed it. It is silly to expect my happiness to come from outside myself—from something I can’t control. I have a good life. I have two beautiful brilliant healthy happy children. I have a loving husband of twenty years who has never had a mid-life crisis. (I asked him last night and he confided that he felt like having one but then decided to buy a new car. Whew. Hardly a crisis at all.) So who cares if I have an agent or not? Who cares, really, if I ever get a book published? I'm still a writer. And the truth is, I live out my dreams every day. 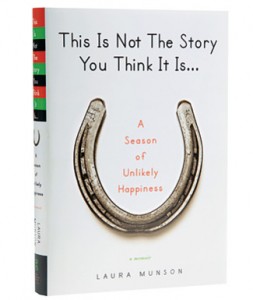 Email ThisBlogThis!Share to TwitterShare to FacebookShare to Pinterest
Labels: Laura Munson, pursuing a dream, This Is Not the Story You Think It Is