Guest Blog From a Teen Reader

Hearing all these crazy stories of my mom’s e-fame has finally gotten to me. I crave some of the attention that you 41 blog-readers can provide. And I assure you that there are exactly 41 of you, if there were more, my mother would have eagerly informed me of your multiplication at once (“Wow! 42 readers?! That’s impressive, mom”). So now that I command the attention of a legion of people I don’t know, I will declare a book (well, 9 or 10 books) that you should read. And you probably will heed my suggestions because apart from the convincing argument I am about to make, I am also in a position of authority in writing this blog (whether or not I deserve it) and people love authority figures.


It is kind of hard to explain to you all 9 (or 10) books that you need to read so, with the help of Wikipedia, I can provide you with a handy diagram down the page a bit. The first book is Orson Scott Card’s Ender’s Game which, if I had to make a guess about my demographic, is a book you have heard of but have not read. I’ll give you a quick summary (without giving anything away of course): Andrew “Ender” Wiggin is a 5-year-old “third” in a future when no family is allowed to have more than two kids. His birth was authorized, however, because the International Fleet—designated to train and command Earth’s defenders from alien threat—felt that if the trends seen in his older siblings continued, he could become a genius of the caliber required to save Earth. They soon wisk Ender away to the space station known as Battle School where all the best and brightest kids are taken to be raised as soldiers so that they can stop the looming invasion from Earth’s insectoid extraterrestrial foes: the Buggers. Right off the bat, it is made clear that Ender is Earth’s best hope for survival, but that doesn’t earn little Wiggin many friends in the hyper-competitive atmosphere of the Battle School. Ender devotes himself to preparing to fight the Buggers but he quickly realizes that the teachers are not telling him the whole story. How is Ender supposed to defeat the alien onslaught when it seems like he’s the only one trying to stop the Buggers, and everyone else just seems to be trying to stop him?

You wanna read Ender’s Game now don’tcha. Well you should probably just minimize this page and go to the library right now and read it. I’ll wait. Ok now that you’ve finished that fantastic book you’re probably saying “But Ben, I want more Orson Scot Card! What happen’s next in the ‘Enderverse’?” and that is where I come in with this diagram outlining all the stories of the Enderverse. The blue are books and the pink are short stories. 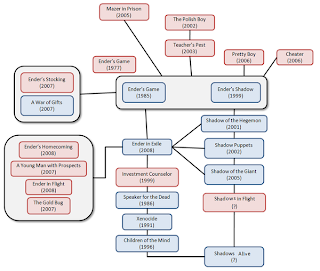 Above: The production value of mom’s blog increasing greatly due to the addition of helpful graphics

I’ve been saying you only have to read 9 (or 10) books because A War of Gifts only barely touches on the overall story of the Enderverse since Ender is merely a side character in it. To read the diagram, start at Ender’s Game and then you can either go down through Ender in Exile to Speaker of the Dead etc. or you can go over to Ender’s Shadow which takes place parallel in time to Ender’s Game from the point of view of another Battle School student, and then read the next three Shadow books. I’ll leave that decision to you. So now that you have already read Ender’s Game and are preparing to read Card’s other books, I think you’re prepared to hear Orson Scott Card’s dark non-secret. He is clearly and obviously a homo-phobe.

Now normally I would just brush aside that information saying Card is merely a self-loathing, closeted homosexual like apparently every other outspoken homophobe in the news lately. But just listen to (read) this quote from Wikipedia: "Regardless of law, marriage has only one definition, and any government that attempts to change it is my mortal enemy. I will act to destroy that government and bring it down..." Orson Scott Card said that. Can you believe it? Neither can I. His essay on why Intelligent Design should NOT be taught in schools was rational and logical (read it here) yet his views are the exact opposite of mine in one area I typically equate with whether or not a human being is at all rational.

So yeah… I went through and read almost all of Orson Scott Card’s books in the Enderverse anyway. But I had to stop short in Children of the Mind because it’s a very philosophical book and I couldn’t stop thinking about how hearing him out is like supporting his warped (though certainly unique) world views. I was so disappointed and disallusioned and dissed-off at, like, humanity. How could a person who produces such awesome books be so not-awesome? 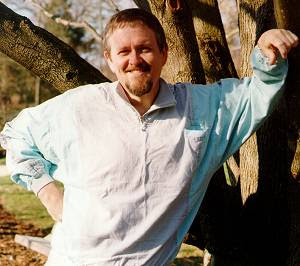 Above: The face of a homophobe who happens to also be an excellent writer


Now you’re probably wondering where I’m going with all this. You’re doubting my ability to keep this blog positive and coherent despite knowing that I am the authority figure in charge here and I wield my blogly powers for good, not evil. As I’ve been going through and rereading all of the books in the Enderverse lately, I have been trying to deal with the paradox of bad author vs. good book and that led me to what I think is a very important conclusion when it comes to literature.

Now look at how I made my revelation about literature all clear and separated-out from the rest of the blog like that so that you could tell it’s important. Recognizing that a book is not its author is really significant. For example, even though I think the Twilight books are poorly written and also boring (my mom actually made me listen to the book on tape—which is a story for another day—so I’m not just speculating about its terribleness), if I met Stephanie Meyer I would try my best to not let my opinions on her books influence my opinions on her character.

Another example is when I had to read Mark Twain’s Huckleberry Finn in 10th grade. My teacher introduced the book with an essay about how the whole thing is inherently racist and therefore bad. I mean, come on! Give the book a chance! The entire time I was reading the book I kept waiting for the racist part to happen so I could come to class the next day and discuss it with disgust to my fellow classmates. But it turned out that I wasn’t offended by any of it, and if I hadn’t read the whole thing thinking Twain was a racist I think I would have enjoyed the book so much more (and if only I could have thought of the thesis of this blog back when I had to write my paper on Finn, I would’ve gotten a much better grade!).

All that realization aside, though, there is one instance in which I refuse to follow my own guideline from above. And that book is Marianne Wiggin’s horrible atrocity commonly known as Evidence of Things Unseen, but in my heart it is known as Spectres of Agony! Mutilator of Worlds … Blood (I’m just thinking of bad things here). I could open that can of ridiculous metaphors and dialogue without quotation marks (really, who doesn’t put their dialogue in quotes other than Cormac McCarthy?) right here but I think this blog is already running too long. So you’ll just have to take my word for it that that book is so bad as to override my new rule of not judging and author by her books.

Right here we’re just going to have a little aside where I point out the astounding coincidences in this blog that should further persuade you to read Ender’s Game (even though you told me up there that you’ve already finished it). First, Marianne WIGGIN is like Ender WIGGIN. Craziness. And, in Battle School, the kids are divided up into groups of 41 … the exact number of readers of this blog. Now we’ll move on.

With my new-found knowledge of literature in hand, I feel properly equipped to reread and re-enjoy Card’s entire Ender series. Judging the book on its relationship to me, not its relationship to Card is better all around. Card gets the money from my purchasing his work, and I can read what are really genuinely good, insightful, philosophical and well-written books. There really is too much to gain from this series to turn it down because of something its author said. And so now I leave you with that unbiased and objective view on one of the best science fiction books of all time. I’m putting away my mighty virtual pen of blogging now and thus losing the authority it provides. So now you’ll have to take it from this teen on the frontlines of YA novels that Ender’s Game is a must for any writer or reader.

P.S. I know I know, stop flattering me. This blog was so amazing that you think I should start a blog of my own and then go on to garner fame and respect from the entire world while still living in my parent’s house like Peter Wiggin (seriously, read Ender’s Game, you’re running out of excuses now), but this blog has taken up some small fraction of my life and, like Henry David Thoreau once said: “If I knew for a certainty that a man was coming to my house with the conscious design of doing me good, I should run for my life.” Just kidding. The real quote is: “It seems to me that I have several more lives to live, and can not spare any more time for this one”.