Yesterday I found myself walking out of a bookstore with my husband. It was a pleasantly sunny day and we’d been strolling around for a while holding hands. Across the street was an impressive-looking stone tower. We stepped off the curb to head toward it and I burst into tears. Let’s just say I’m not the type of person who cries in public. But there I was, blubbering and half laughing and staring at the stone tower and at the other impressive stone buildings lining the street, while weirdo waves of nostalgia and pride and love washed over me.

I had been on this particular street once before. 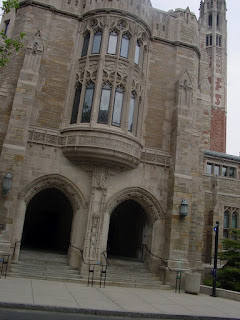 It was seven years ago during a vacation in New England. My son used to be good friends with a sweet little girl who moved away when her father took a position in the art and architecture department at Yale. Even though I grew up in Connecticut, I had never seen the campus, so when the mom invited our son to spend an afternoon with her daughter, I sort of invited our family along too. We met at a local pizza restaurant (New Haven, apparently, is known for its pizza) and then while the kids caught up, we went on a cool tour of the campus.

The college is a pretty impressive place. It’s smack dab in the middle of a very urban setting, but unlock one of the metal gates (the mom had a key!) and step through a stone archway, and you’re in a different world of courtyards and stained glass and gargoyles jutting out of gothic style buildings. “I wanna go here,” our son said to us at one point, and I think I may have smiled at him and said: “Dream on, kiddo.”

The funny thing is, he did.

If you’ve been reading this blog, you may have gotten a sense of how I feel about pursuing a dream. I’ve wanted to be a writer (which entails having my novels published) for as long as I can remember. It hasn’t been what anyone would call an easy journey, but out of sheer determination (some might say stubbornness bordering on lunacy) I persevered. The last few years of this seemingly endless process—writing, revising, submitting, and absorbing the blows of countless rejections—I’ve watched my son go through a similar (although MUCH shorter!!) process choosing and applying to college. The main similarity, I’ve noticed, is that we were both doing a ton of work and then having to step back and let some outside force evaluate us.

Somewhere along the way our son announced that he’d like to apply to Yale. Everyone said it was a total crapshoot. The place admits roughly 6% of its applicants and for even the very top students it’s something like a lottery. Most likely he would not get in, but what the hey, my husband and I told him, why not take the chance? It would be risking failure to do so, but not applying meant never knowing what might have happened.

Long story short: he was accepted. Which is why we were in Connecticut yesterday and I was strolling around holding my husband’s hand and gawking at stone towers and sobbing like a goofball on the streets of New Haven. There was the same tower our little boy had skipped by with his sweet little friend. There was the pizza restaurant where we met for lunch. There were the same elaborate metal gates, and since we were on an official tour, we were allowed inside the hidden courtyards, where older kids walked purposefully off to class or sat on slate roofs sunning themselves.

I have never felt such an awesome sense of gratitude in my life. When my husband and I walked out of the bookstore, I looked at the tower and then below as our son emerged through one of those arches, hands in his pockets, like he’d been striding across that campus for years.

Listen, faithful readers, if you have a dream—I don’t care how much of a crapshoot people tell you it is--I am here to tell you: What the hey. Tell the Universe what you want and take your shot.

PS. That writer dream of mine is about to come true too. 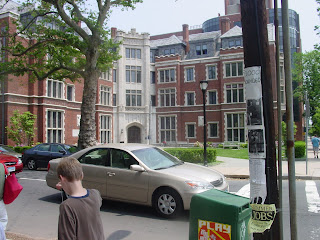 Email ThisBlogThis!Share to TwitterShare to FacebookShare to Pinterest
Labels: being a mom, pursuing a dream, Yale