A college professor of mine once lectured about how it was harder for boys to read books with female protagonists than it was for girls to read about males. I’m not sure I’m going to get her argument right—seeing as how I heard this lecture a couple of decades ago (yikes!), but the gist of it is that most of what we read is from the male point of view, so women from a very early age become adept at seeing though a male lens. (Think of how often you see the word man or the pronoun he. Men for most of history have been the default sex in literature. This likely applies to race too.) When a girl reads a book with a male hero, even if the point of view is first person, she doesn’t have a problem imagining herself in the guy’s shoes. But when boys read a book with a female “I,” according to this professor, it can be jarring.

Who knows if this is true. (For the record, I’m a female.) For research purposes, I did a little survey. Okay, the truth is I asked my teen son this morning while he was eating breakfast:

So there you have it.

I’ve heard editors at conferences say that girls will read “boy books” (see Harry Potter) but it’s generally accepted that boys won’t read “girl books.” (Have you ever seen a guy carrying around a copy of Twilight?) Everyone’s looking for what they call crossovers, series like Hunger Games that both sexes seem to enjoy. But for the most part, it’s girl readers who are driving the industry, with some editors giving up on boys all together, saying that boys either don’t like to read or they’re drawn to non-fiction. This trend is not surprising to me. I’ve read a ton of contemporary YA novels, many of which star girl protagonists caught up in love triangles with gorgeous, supernatural guys. Or girl protagonists surviving in bleak post-apocalyptic landscapes while caught up in love triangles with gorgeous, not-supernatural guys. Can’t imagine many boys gravitating toward any of these books.

Not sure where I’m going with this, but I’ve been thinking about it since I finished reading Ship Breaker by Paolo Bacigalupi. This is a book by a male writer about a male hero with a stereotypically masculine-looking cover, all brownish and gritty with a grim guy’s face hovering over an oil tanker. I confess that I probably wouldn’t have picked it up if it hadn’t been for the prominently displayed medals on the cover. (It won the Printz Award in 2011 and was a finalist for the National Book Award.) 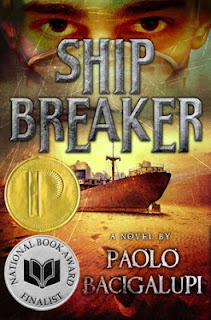 Not exactly my thing—with lots of technical description of the inner workings of ships and some violent interactions between our hero and his enemies and a chase on the high seas that echoes the pirate adventures of Treasure Island—and yet, I found myself after a few chapters sucked into the story. It’s another post-apocalyptic novel but one I haven’t quite seen before, a world decimated by super storms and environmental disasters and a poor boy and his crew trying to eke out what they can as scavengers of ruined oil tankers. But the heart of this story is the boy’s growing awareness of the unfairness of life, of the stark differences between the haves and have-nots, and the role that luck and fate and smarts play when you’re trying to survive. Still mulling over the questions raised and glad I gave an obvious boy book a chance.

Okay, so maybe this is where I’m going with this post. Now I’m thinking of other boy books I’ve liked. If you know a teen boy (or a teen girl growing weary of Twilight-related novels) take a look at these:

1.      Ripper by Stefan Petrucha. An orphan boy in turn of the century New York City, who dreams of being a detective, stumbles onto a mystery involving Jack the Ripper. Page-turning adventure with a Steampunk feel. What’s Steampunk, you  might ask? Even after being told numerous times, I still don’t quite get it, but this trendy genre features gadgets and sci-fi-ish urban settings. Think: Golden Compass and movies like Wild Wild West and Sherlock Holmes.
2.      Maze Runner by James Dashner. Clear your schedule for this page-turner. A boy wakes up in a freaky forest at the edge of a maze. There’s a group of other boys, shades of Lord of the Flies, all named after famous thinkers in history. Our hero, Thomas (after Edison) is compelled to figure out the maze and solve the mystery of why the heck he’s there.
3.      Anything by John Green. I’ve blogged about his books before and ended up sounding like a gushing, over the top groupie. I love every single book this man has written. Please Lord, bestow on me one tenth of his talent. See, I’m doing it again. Here, read this for elaboration on John Green’s genius.
4.      Across the Universe by Beth Revis. A good example of a crossover. Book alternates between boy and girl narrators. The girl has been cryogenically frozen on a ship leaving the dying earth for a more sustainable planet. Unfortunately someone thaws the girl out early. The boy is the king-of the ship-in-training trying to figure out the mystery of the girl and the secrets behind the community he’s supposed to govern. (There’s a reversible cover on this one. The “girl” version has a boy and girl kissing ala Sleeping Beauty. The “boy” version has a blueprint of a space ship.)
5.      For the philosophical/questioning kid in your life, try this year’s Printz winner Where Things Come Back by John Corey Whaley, (full review) or
6.      There Is No Dog by Meg Rosoff (see review)
7.      Like history and/or mythology? Check out Tracy Barrett’s latest novel The Dark of the Moon, (also a crossover) a cool twist on the myth of Theseus and the Minotaur, and
8.      Alan Gratz’s Samurai Shortstop, about a boy in turn of the last century Japan struggling to reconcile his samurai past with his interest in baseball
9.      A soon to be published novel by the writer of this blog… (I’ve got to clamp my hand over my mouth to avoid spilling the beans yet on this one—the deal I’ve been tiptoeing around for months now—can’t say anything more; promise to reveal all soon, but one teaser: it may possibly star a male narrator…)

Email ThisBlogThis!Share to TwitterShare to FacebookShare to Pinterest
Labels: Across the Universe, Dark of the Moon, Maze Runner, Paolo Bacigalupi, Ripper, Samurai Shortstop, Ship Breaker, Where Things Come Back