If you've been following my blog for a while, or even at random intervals, you know that I've been writing for a long time and dreaming about being published for nearly as long. This has not been what anyone would call, uh, easy. It's helped, though, to have a supportive family-- bemused hubby and easy-going darling children-- who don't mind their manic/distracted mom serving chocolate chip pancakes for dinner multiple nights per week whenever she's immersed in a project. Finding an awesome writing buddy, Donna Koppelman, to share this crazy up and down process with, has been a godsend too.

Several months ago the alternating exhilarating/soul crushing journey reached a new crescendo when a glimmer of a potential nibble turned into an actual book deal. I got The Call from my agent on January 26 that Beyond Words/Simon & Schuster wanted my young adult novel THIN SPACE, but because the deal wasn't hammered out officially until last week, I've had to sit on the news. Now I hate to say it almost feels  anti-climactic.

Okay. I'm totally lying. When I signed the contract I was such an over-the-top loon I made my neighbor take pictures of me at the post office. Here's me, with confused Dave the Postal Worker, as I mail the contract back to S & S: 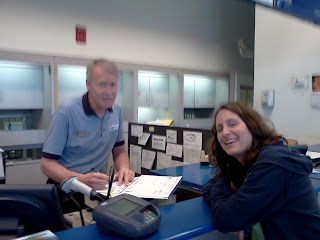 It's hit me that I've blogged about every step in this journey--chronicled every twisty-turny, angsty thought as it crossed my mind except for the feelings I had as I experienced the actual Reach-the-Destination part. And now that initial excitement is gone and left unchronicled. I could tell you about how I was folding laundry when I got The Call. How I put down the phone and cried tears of joy into my daughter's clean gym shorts. How I called my husband and texted my kids and my mother. How I toyed with the idea of opening a bottle of champagne but it was only like, two-o'clock, and I was alone in the house, and that seemed kind of, I don't know, weird. Instead I called Donna and strangely she was more excited in many ways than I was. I think I was numb, shocked that this was actually happening.

The truth is I still feel like that. So I didn't write any of this down at the time. And therefore I can't go back to the moment and capture it. But maybe I can do the next best thing. I can share with you what Donna wrote on her blog:

A Gift of a Hairdryer

Today in the mail, I received the gift of a hairdryer. I cried as I opened it. Sobbed, even. My hands shook as I held it for the first time. I sat for a good twenty minutes with this hairdryer in my lap. I just couldn't believe it. I finally had the hairdryer. After three years (and really more than that), I held the hairdryer in my hands. Even as I type these words, my fingers shake, and I can't believe it.

You see, I have a writing partner, an accountability partner. More than three years ago, we met at Highlights Institute at Chautauqua, exchanged email addresses and a few pithy words while in line at the port-a-potty. Six months after Chautauqua, JC dug my email out of her bag, and sent me a message. It was the sweetest message one writer can send to another: "I think I know a good home for the novel you are writing." You see, she had met an editor at a conference who was looking for something like my project, and she wanted to share the news. It was so kind and thoughtful, and over the next few weeks, we shared our writing goals and struggles. We commiserated that no one else seemed to take it as seriously as we did. We weren't just dabbling. We were serious writers. So we made a pact that we adhere to even today.

Every morning, JC sends me her goals for the day, and I send her my goals for the day (via email). Then, at the end of the day, we own up. Did we meet our goals or not? Sometimes we even send the work to each other to PROVE it. Developing this partnership was a HUGE turning point in my writing. It made me goal-oriented and accountable to someone--a surprisingly hard thing to accomplish when you work alone.

Through the years, we have read hundreds of books (passed them back and forth through the mail) and proofed each others' work. We've shared lots of craft advice from other writers and read many such books. In Stephen's King's amazing work ON WRITING, he tells about when he started writing. His wife was so patient and supportive. When he finally sold his first novel, he wanted to celebrate, to get her something to thank her. For whatever reason (and due to the fact that he is, in fact, a man), he got her a hair dryer. Yes, a hair dryer. JC and I found this so hilarious that we pledged that the first one of us to sell a novel would buy the other a hair dryer.

And you guessed it. JC sold her first novel. I'm actually not supposed to tell you until the papers are signed, so don't tell anyone, but it's true. And it's big. And it's amazing and exciting and unbelieveable all at once. Because while we said over and over that we weren't giving up until we made it, a little tiny part of me always wondered and worried. What if? What if neither of us ever makes it?

But guess what? Now one of us has. And it feels like both of us. Really. Because we've been in the trenches together for so long. I wanted to see the editorial notes as much as she did. I went over the contract with a fine-toothed comb, too. I screamed and cried and celebrated on that big day last week, maybe as much as she did. Too bad we're several states apart and couldn't celebrate together. At least not yet. But we will.

Anyway, today is the day the hairdryer arrived. It is the most awesome, amazing, fantastic hairdryer EVER. I can't wait to use it. Or maybe I should bronze it. At any rate, I am paying very close attention to the quality and features of this hairdryer.

Because hopefully, I will have to purchase one myself. I hope to send an awesome hairdryer across three states one day.

But in the meantime, it is more than enough to have this hairdryer of my own, JC's contract, and the beginnings of a dream-come-true. No matter what happens in my career, I have a hard time believing it will beat this hairdryer.

I need to get going on my thank you note for said hairdryer, and I think I'll drop a line to ol' Stephen King while I'm at it.

Best of luck, JC. I will be touting your awesome novel right here, and yes, it is the one I predicted would be snatched up first. It is fantastic, and everyone is going to LOVE it. And to quote my favorite celebrity crush, "Oh, the places you'll go!"

(And here's me again: Thanks Donna, for everything, and eagerly awaiting my own gift of a hair dryer from you....)
Posted by Jody Casella at 11:46 AM