Confessions of an Author Groupie

I first caught the author fan bug back in college. I have no idea how I found out about it, but one of my all time favorite writers from childhood, Madeleine L’Engle, was doing a signing at a local bookstore in Memphis. I dragged my roommate along and we both bought a copy of A Wrinkle in Time for her to sign. The store was small (readers from Memphis, please tell me this place, Burkes, is still open) and the line snaked around the shelves and out the door. There was a woman, I guess who was L’Engle’s publicist, who kept the pressure on, reminding the crowd that they were leaving at a specific time to catch a plane, no matter if there were people still in line or not. I sweated it out, stuck behind stacks, trying to get a glimpse at least of my childhood idol. I made it up to her table with minutes to spare. I don’t know what I was expecting. Someone bigger maybe? But Madeleine L’Engle seemed kind of shrunken. Very sweet, though, and smiley. The hours I’d waited I planned the things I wanted to say to her. Your books made such a difference to me. You saved my life. When I reached her, though, I was tongue-tied. "Thank you" is all I managed to say, and she nodded and scribbled:


Not exactly sure what she meant by that, but what an awesome, writerly thing to write.

I was lucky in grad school. University of Memphis had just started an MFA program and I think some local bigwig had donated money to host visiting authors. The handful of students in the program that year got to meet some very cool people. Here, I’ll name a few just to make fellow writer groupies jealous: John Updike, W.S. Merwin, Seamus Heaney, and Richard Russo.

I got interested in writing for children when I was an English teacher and attended a National Council for Teachers of English conference. The keynote speaker was Robert Cormier (The Chocolate War) and he was so brilliant and funny and somehow heartbreaking to listen to. I remember driving home thinking: I had no idea. (That was the English major snob in me that thought that writing for children was somehow lesser than writing literary fiction for adults.)

That topic has come up again over the years. Just a couple of weeks ago I went with my kids (who now, when possible, I take along to these book signings) to hear a talk by M.T. Anderson, author of one of my favorite novels, Feed. Someone in the audience asked him why he writes for young adults and he said he gets that question a lot. Once he got a letter from an adult that basically implied that his books were so good it seemed kind of wasteful for him to be writing for kids. What? he asked, laughing. Were they saying that kids’ books should be crappy?

I was a gushy, embarrassingly silly groupie at a talk given by Lauren Myracle. (Author of the Eleven, Twelve, and Thirteen series, and the recent critically acclaimed Shine.) Lauren was very cool, as anyone who reads her books would expect. When I confessed that I was a writer too, but sorta struggling with the publication aspect of things, she told me to hang in there. Also, she let me take a picture of the two of us with my phone. 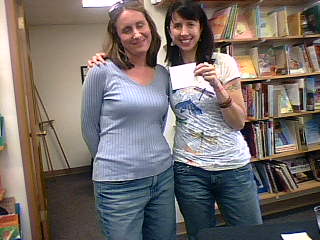 (Okay, I am the one with my eyes closed and Lauren is the hip chick holding the sign. In case you're wondering, it says "Hi Donna"-- so I could forward this pic to my best writing buddy Donna and rub it in that I was standing there with LAUREN MYRACLE!!!)

I had a nice chat with Louis Sachar once while he signed his awesome book Holes for me. I told him that he made such a difference in the bedtime life of my daughter, who for many years fell asleep listening to a tape of Sideways Stories from Wayside School.

Lately, I’m more-- I’d guess you’d call it -- "technically curious" about how writers present themselves at book signings (cross my fingers, I am hoping that one day in the not so distant future I will be doing some of these author talks myself). Do they read a passage from their latest book? Just start talking with a prepared speech? Take questions from the audience?

The prize for most entertaining presentation easily goes to Mike Mullin, author of the super volcano blowing off under Yellowstone adventure story, Ashfall. The main character in that novel practices martial arts and Mike told the audience that he was working on his black belt as he wrote the book. At the end of his talk he demonstrated his mad skills by karate chopping a cement block in half and then donating the two pieces to the bookstore.

Well. Not sure how I can ever hope to top that.

In case you happen to live in the Columbus, Ohio area and want to meet up with me as I stalk, um, chat with another visiting writer:

Come early, though, if you want to beat me to the head of the line.