Lamentation on a Child's Graduation


Lately I’ve been suffering from a major case of Nostalgia-itis.

My baby boy – (at least he still seems like a baby boy to me--when I close my eyes I picture him, grinning, his head tilted, his pudgy little pink-cheeked face. Sometimes even now, I can see glimpses of that version of his younger self superimposed on the tall, very thin, professorial and serious-looking eighteen year old young man he’s grown into) –so this boy is about to graduate from high school. And the chapter of my life as Mother of a Little Boy is drawing to a close.

(Pardon me for a moment while I get out my hankie.)

The symptoms of Nostalgia-itis, if you’re not familiar, are out-of-control weeping in the grocery store while you peruse sappy graduation cards, bouts of bursting into tears walking out of college bookstores, and lurchy waves of deja-vu as you obsessively comb through old photo albums and saved school papers.

I’ve had brushes with this nostalgia condition before.

When I dropped him off at his kindergarten classroom and hovered in the doorway and watched him settle into playing at the block table, already absorbed and happy and not noticing or caring that I was still there, and so slunk away and went to sob in my car.

The morning he took the bus to the big middle school on the opposite side of town. I had worked it out with him earlier—at his request—that I’d be there waiting, just in case he needed me. I parked a safe distance behind the bus, then crept into the middle school. My son and I locked eyes as he sauntered by with his classmates and he gave me a look that clearly said for God’s sake get out of here before anyone sees you. (I like to think that he was relieved I had come anyway.)

The summer after seventh grade he attended a summer program at Davidson College for three weeks. My husband and I got him settled in his dorm and both of us were having these weird flashes of the future—what it would be like to drop him off at college for real. There was the choosing of the closet and the making up of the bed and the awkward meeting of the roommate’s parents (as they glanced around and took in the fact that we’d snagged the better bed and the bigger closet). Later, the program administrators held a session for parents only. My husband and I shifted uncomfortably in the large room quietly mocking the anal, helicopter parents who asked questions about the cafeteria food and the laundry facilities. I gaped at those people and on the way home (as an alternative to crying about leaving our son six hours away for the longest time apart from us ever) I asked my husband what had been tormenting me:

"Did you see those people—those parents? They looked like they could be OUR parents. They were so… middle-aged-looking."

And my husband, God love him, smirked and said, "Jody, what do you think WE look like?"

Gulp. I guess I hadn’t thought of it that way exactly. Which brings me to my point about the true, underlying core of nostalgia-itis. I don’t think it’s merely about watching your beloved child grow up and reach milestones and eventually, inevitably, leave your home (and you) to go out into the world. I think it’s about your growing, nauseating realization that your own life is winding down and slipping away.

To rub this point in further I present to you Donald Hall’s classic poem on the very subject:

My son, my executioner
I take you in my arms
Quiet and small and just astir
and whom my body warms

Sweet death, small son,
our instrument of immortality,
your cries and hunger document
our bodily decay.

We twenty two and twenty five,
who seemed to live forever,
observe enduring life in you
and start to die together.

At my son’s pre-school graduation, I already felt his little life zooming by. I sat in the audience with my daughter, then a toddler, on my lap, and blinked back tears. What finally put me over the edge was the dumb song the graduating kids sang, or rather screamed (for some reason four-year-olds tend to yell instead of sing.) The verses were from The Little Mermaid and the part that killed me was my beaming boy sing/shouting:

It makes me cry now. And I will be crying later this weekend when I watch my beautiful boy cross the stage and take his diploma. You may be happy to know that I will have a fresh hankie on hand. Also, I'll be doing my best to freeze the moment, to live in the Now, to cherish the ceremony--and our final summer ahead.

Because I suspect that may be the only cure for Nostalgia-itis. 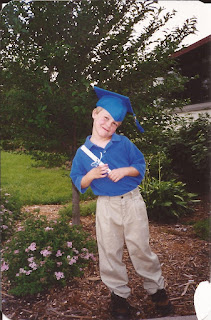 Email ThisBlogThis!Share to TwitterShare to FacebookShare to Pinterest
Labels: being a mom, Donald Hall, My Son My Executioner