One of the categories in the Read Harder Challenge is "Read a Book Over 500 Pages Long."

Because I am resolved to complete this challenge, and because I thought it would be wise to get what appeared to be, on the surface, the most difficult and time-consuming of the categories out of the way first, and because I thought I'd add a challenge to the challenge by reading books only found in my home, I picked up Anthony Doerr's All the Light We Cannot See.

It's been sitting on my bedside table for almost year and it's been on my radar even longer. My book club read the book six months ago (but I'd dropped the ball and never even managed to open it) and then Anthony Doerr visited my town on a book tour and I went to his talk, and it was fascinating and funny-- somehow he worked in a slide show of microscopic organisms and the oldest tree on the planet, as well as the story behind the book. (It took him over ten years to write.)

The time was well spent because All the Light We Cannot See won the Pulitzer Prize for fiction in 2014 and was on bestseller lists for months. 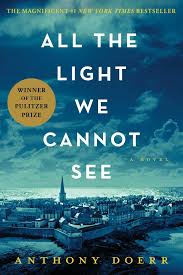 There's a complicated structure to the book-- lots of jumping back and forth in time and moving between the two main characters, an orphaned German boy who ends up being in the German army during WWII and a French blind girl who unknowingly has in her possession a precious stone (which may or may not have a curse attached to it.)

The stories of the boy and girl seem to have nothing to do with each other, but then they twine together in a clever and beautiful way.

The book didn't feel complicated though. And it moved along surprisingly quickly.

I guess I should mention that I was sort of feeling like I was cheating by putting it in the 500+ pages category. The chapters are short, many only a page or two, and many of the pages are not full pages.

I read it in two days.

But then I picked up my next book-- this one for the category "Read a Book Originally Published in the Decade You Were Born"-- and to go along with my new rule of reading only books I already have in my home, I stumbled upon a book I'd bought at a used bookstore years ago but never opened: Ship of Fools by Katherine Ann Porter. 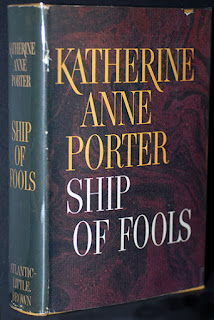 For the record it was published in 1962.

And while it is not quite 500 pages long (clocking in at a respectable 497), let's just say that it's going to take me a little bit longer than two days to read it.

Fun fact: they don't publish books like this anymore. Maybe even in 1962 it was an anomaly. I just looked up reviews and while it was up for the National Book Award and was a Book of the Month Club Selection, it was also called "unwieldy" and "enormous."

That was, um, Katherine Anne Porter's own assessment of the book.

It does not have a complicated structure or setting--basically, it's a bunch of people traveling from Mexico to Germany in the early 1930's. So, that's it. Dozens of people. On a ship. And so far--I am on page 117-- I can honestly say that all of them are fools.

And yet, even taking into account the extraneous character descriptions, the lack of plot and the absence of tension-- it's weirdly mesmerizing.

Last night I turned a page and piece of paper slipped out, a torn recipe for "Curried Veal Bombay" from the magazine Ladies Home Journal September, 1962, which was apparently being used as a bookmark by a previous owner of the book.

The reader had stopped on page 107, and I'm guessing, never opened the book again.

Most likely the recipe was never made either.