After I wrote a handful of blog posts about decluttering my house, people began sharing with me their own stories of decluttering. The general consensus seems to be that

1. we all have accumulated way too much crap that we don't really need
2. once you get rid of a lot of that stuff, you never miss it
3. in fact, you feel pretty darn great after the stuff is gone

Several of those people suggested I read the book The Life-Changing Magic of Tidying Up by Marie Kondo. And recently, I did.

It's a fascinating and strange little book. 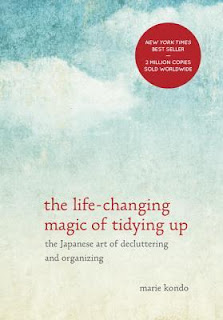 It reads, at first, like an expanded version of a "how to organize" article in a magazine. There are tips and tricks for choosing what to keep and throw away, pointers on where to store things, pages on how to fold your clothes properly and place them in your drawer. (Don't stack! Think vertical!)

Intermingled with stories about Kondo's history as a compulsive tidier (it began, in earnest, when she was in first grade and volunteered to clean up her classroom), and descriptions of her clients' over-stuffed homes and apartments, (she is fond of comparing messy closets to tangled up noodles).

Plus, there's a whole lotta fun, new age-y gems like these:

"Possessions that have a place where they belong and to which they are returned each day for a rest are more vibrant."

"Have you ever had the experience where you thought what you were doing was a good thing but later learned that it had hurt someone? ...This is somewhat similar to how many of us treat our socks."

I confess that I have never considered how my socks feel when I ball them up and stuff them in a drawer (not happy Marie Kondo tells me). Also, I don't greet my house when I walk through the door, and I fail to thank my purse and paperclips and pot holders for fulfilling their duties each day.

But joking aside, I like Kondo's decluttering philosophy, which can be boiled down to Get rid of the things that don't bring you joy.

This is easier said than done.

Something I learned over the course of my year of purging is that it takes energy to make the decision to get rid of things, especially when so many of those things are imbued with emotion, memories, expectation, obligation, duty, and guilt. It's overwhelming and often paralyzing to even look at some of our things, much less let them go.

Kondo's advice is that we should "make a parting ceremony to launch [our things] on a new journey." Celebrate the occasion, she says. Tell them to have a good trip.

The book concludes with success stories of Marie Kondo's clients after they've gone through her decluttering course. Their acne cleared up! They lost weight! Something something freaky and gross about the digestive system! But she ties it together with a lovely thought:

I believe you, Marie.

Last year during a particularly cold weekend, my husband I burned three shoeboxes full of old check registers and credit card statements. Okay, we did not perform a ceremony, but we did take turns reading aloud from select pages as we tossed them into the fireplace. Hey, did you know we wrote a check for $12.50 to Dominos in Memphis in 1992? Huh, remember that time we joined a gym and never went but paid the monthly fee for three years? Shoot, can you believe how little we used to pay for rent?

Laughing and sometimes pausing to sputter out mournful nostalgic sighs, we watched our past go up in flames.

It was a nice way to spend an evening together.