On Traveling Alone (and writing about it)

Last January I flew to Minnesota to visit a friend who was a student at Hamline University. Hamline is one of the few colleges in the country that offers an MFA in Children's Literature and I was curious about the program and also wanting to support my friend as she presented her critical thesis.

I had the frequent flier points and my friend was graciously letting me bunk with her, but still I was little anxious about going.

I'm a wuss when it comes to traveling alone and this trip was a million miles out of my comfort zone. Flying in winter. Renting a car (something I had never done in my life). Going to place where I had never been.

Did I mention I'd be traveling alone?

But I bucked up and made the travel arrangements. A few weeks before I'd started working through The Artist's Way again. One of the things that hits you when you do the exercises (or at least hit me) is questioning why you do the things you do, shining a spotlight on habits and thought patterns and beliefs

and considering different possibilities for yourself.

Reflexively, I say I hate traveling, that I am afraid of jetting off to an unknown place--alone--but why? And what would happen if I pushed my fears aside... and embraced the adventure?

I asked myself this very question in my Morning Pages on the day I left for the trip. (Side note: morning pages are the first directive of The Artist's Way-- 3 pages, handwritten, stream-of-consciousness writing that Julia Cameron says all AW-ers must do each day.)

I was already stressed out because my flight had been delayed and I was stuck at the airport, wondering and worrying if we'd ever take off and what would I DO and the worrying-spirals began spiraling and I was jumping ahead to future worries--what if I missed my connecting flight? and what if I had problems picking up my rental car? and what if I got lost driving to Hamline? and--

But as I wrote these worries down in my morning pages notebook, I felt them drifting away and suddenly, for some reason, I was writing about the scene in Harry Potter, where Harry is worrying about how he'll defeat a dragon and his teacher tells him YOU HAVE A WAND, and I realized that I too had a wand and the wand was called: a credit card

and then I felt better.

The rental car was small and low-to-the-ground and I felt like another person driving it, bumping along on the highway that led from the airport through the unfamiliar snowy frozen landscape, following the lovely, trustworthy (I hoped!) GPS lady voice.

That afternoon, after a quick visit with my friend at Hamline, I drove forty miles from St. Paul to Northfield to spend the night with an old college friend, nearly kicking myself for making that extra bit of travel arrangement because what the hell was I thinking? MORE driving on unfamiliar highways? MORE time spent in the low-to-the-ground car listening to 1940's music?

I know what you're thinking. Why didn't I change the channel? Answer: I don't know. The entire trip was beginning to feel like the Twilight Zone and the music just added to the other-worldly effect.

After a fun visit with my college friend, anxious to avoid the morning rush hour traffic into St. Paul, I decided to stop at a cafe in downtown Northfield and eat breakfast. But this decision carried with it different anxieties... I'd be eating alone. In an unfamiliar place. Surrounded by unfamiliar people.

Geez, Jody, I thought. When did you become such a big baby?

Carrying my notebook like a shield, I went inside the cafe and ordered a cup of coffee and a bagel. I sat at a table and watched people coming in and going out. I wrote my morning pages. I could DO this, damn it. Sit here. Eavesdrop on conversations. Sip my coffee. Read the newspaper.

I read the entire Home Section of the NY Times, articles I still remember a year later. A story about a woman who collected African American art and nearly all of it was destroyed in a house fire. An article about a guy who wrote a book about set designs in Wes Anderson films. A story about expensive, one-of-a-kind knobs that made me question the interests of the audience of the NY Times Home Section but also, bizarrely, made me want to rush out and buy a bunch of new knobs because who knows. Maybe I could be the type of person who collects one-of-a-kind knobs.

Back in the car, 1940's music blasting, frigid and strange landscape rolling past, I followed the GPS lady voice to St. Paul.

I hung out at Hamline with my friend and applauded her critical thesis presentation. I heard lectures that kept my mind churning, that blew apart my preconceived notions of writing and reminded me why I write books for kids.

But it was the time alone--in the airport, in the car, in the Northfield coffee shop-the unfamiliar, the strange, the different, the confronting of my fears-- that shifted something inside me.

For years I had been pursuing a dream--the dream of having a book published--and I had done it!--but I was so consumed for the next couple of years with marketing and publicity and worrying over writing the next book and trying to sell it and nevermind the big changes happening on the home-front, with my youngest child about to graduate from high school-- and life was happening too fast and somehow too slow, and writing felt like a business and it wasn't a successful business, and I was depleted and forgetting why I liked to write in the first place and wondering what to do next and generally feeling stuck,

which was why I'd picked up The Artist's Way again,

which was why I'd forced myself, despite my fears and worries, to go on the trip to Minnesota.

When I returned home, I wrote in my morning pages:

What I know is that it's possible to craft another kind of life. It's possible to shake things up and try new things or go in a different direction or at the very least, step off the path you are on and try another.

One year later I realize that I still haven't figured out my path, but weirdly, I am okay with it. I drive on, through uncharted territory, a little afraid but mostly curious about my destination. 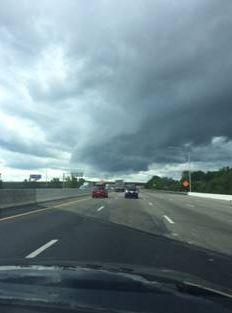