Nearly five years ago I'd hit something of a low point in my writing life. My manuscript Thin Space had been floating around the publishing world for a year and a half. "Floating," for the record, in publishing terms, is actually a nice way of saying "Sitting unread in multiple editors' inboxes."

Then my agent quit the business.

During that floating time, I'd written a sequel to Thin Space. Also, two other novels, companion books of sorts, set in the same dark weirdo mythological world. I started a third that winter.

The book was about a boy who wanted SO MUCH to have the powers and talent and special gift that his family members and friends had. But, alas, it wasn't happening for him. Still, he refused to quit. Consumed by the quest to transform himself, he set about trying to MAKE THIS THING HAPPEN by logically approaching the problem-- devising a plan  and checking off items on his checklist. Practicing. Exercising. Stubbornly refusing to stop despite every setback.

He was a trooper that little guy.

By the time summer rolled around (and my agent quit) I was torturing the poor boy. But for whatever reason, every day, despite the growing futility of the endeavor, I parked my butt in the chair and wrote the latest installment of this idiot kid as he pursued the dream we both could see was never going to come true.

I think it was the end of August when it hit me. Something was happening to this kid. All of his work and crazy determination had gotten him somewhere. Strangely, it was not the place that he'd been striving toward.

He was no longer afraid. No longer consumed by his quest. He was not the same boy he'd been at the beginning. Somewhere along the way, he had been transformed after all.

I finished the book and never looked at it again.

A few weeks later my second agent told me that there was serious interest in Thin Space and if I could hold on for a bit longer, I might have a book deal. (spoiler alert: it took 6 more months before that happened). In the mean time, while I was almost manic with anxiety and frustration and worry, I did the only thing I knew how to do.

I wrote another book.

Last week I went to the Columbus Museum of Art. On a wall in one of the galleries there was a row of pictures, what looked like the same empty glass. The artist is a German man named Peter Dreher. Apparently, those paintings are the representatives of over 5,000 that Dreher calls his magnum opus, Tag um Tag guter Tag (Day by Day good Day).

Every day since 1974 Dreher has painted the same empty water glass. Basically, it's the guy's practice. Wake up, paint a painting of the same glass. He's done it at least 2,500 times during the day. He's also created 2,500 paintings of the same glass at night-- because hey, why the hell not?

In case you're wondering, he does other things besides paint the same glass.

Over the next few weeks I am finishing up a revision of my tenth book. I haven't sold my two weirdo mythological world books. Or the sequel to Thin Space. I still have never opened the 100,000-word first draft of the Boy Who Refused to Quit story.

Oh, I also no longer have an agent.

But here is what is NOT up in the air:

as this tenth book floats around in the publishing world, I know with absolute certainty what I will be doing.

I will be writing.

each day
every day 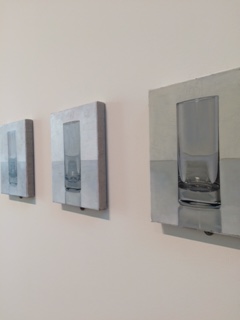