Last week I discovered a nest of bunnies in my herb garden. 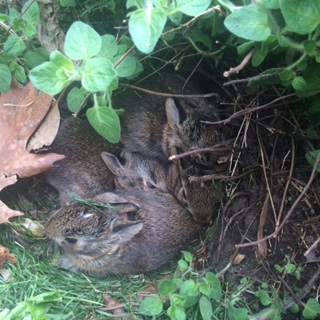 Cute squirmy little bodies under a thatch of grass, and to be honest, my first reaction was annoyance. My husband had recently repaired the fence around my garden and my lettuce and spinach were coming up and now here I had these bunnies, trapped inside with a food source-- MY GARDEN!

There didn't seem to be much I could do about it though. My husband and I got the bright idea that we could feed the bunnies ourselves-- maybe sprinkle store bought lettuce and shredded carrots around the nest for the mother to use so she wouldn't need to raid my garden...

So off we went to the grocery store.

When we returned, we found that our dog Zooey had discovered the nest and the cute little squirmy bunny bodies were scattered all over the place and I surprised my husband (and myself) by basically having a sobbing breakdown.

Is this about the hamsters? my husband asked me later, because he knew I had a history of small dying animals in my life.

Let me tell you The Story of How I Got Two Hamsters For My Birthday and Seven Died.

Once upon a time my boyfriend gave me two hamsters for my 15th birthday. Two boy hamsters, allegedly. But the first night, the fatter hamster attacked the smaller hamster and I woke to the smaller one screaming (and dying), and I was horrified and mad at the fatter hamster until I saw that she had given birth to five tiny squirmy hamster babies in the corner of the cage.

I called some Animal Hotline place and they told me to do nothing. Let the mother hamster take care of the little ones. And I was happy to do that.

Too bad for me that the next day the mother died.

Back to the Animal Hotline, where the kind Animal Hotline Expert told me calmly that I could feed the babies with an eyedropper filled with a mixture of raw egg and milk. So I did that.

And one by one the tiny little babies died. One died slowly in the palm of my hand.

I made a funny story out of it though. And told it to other people in a jokey way. I even used the incident in a writing workshop in college, calling the story The Dead Hamster Theory.

It's hit me over the years that I can use material from my own life in the stories I tell at parties, in the stories and novels I write, manipulating the true stuff with made-up stuff, finding the humor in the sad and horrifying because I know that is a way that I can examine and understand the sad and horrifying and because I know humor can make dark stuff more palatable to readers.

At the moment I am writing a novel where the main character IS this type of person--one who uses humor to deflect, as a form of self-protection, as a way to create some distance between herself and truly horrifying things that have happened to her in the past. I've never written a purposefully funny book before and I'm enjoying it, while at the same time wondering if I'm getting the humor right, if this book will be funny to anyone but myself, and if the darkness at the core of the story possibly might be too dark.

But back to my dying bunnies.

I told my daughter who is away at college and she immediately sent me a funny song she made.


I needed this funny song because after my husband, at my tearful urging, placed all of the stunned potentially dying bunnies carefully back into the nest, over the next few days, when I checked on them, they began to die, one by one.

We are now down to three, and this morning I am afraid to peek in on them to see if they have made it through another night huddled together in the oregano.

Confession: I didn't have a breakdown over bunnies because of what happened with my dying hamsters.

Let me tell you another story:

I found an antique roll top desk with lots of small drawers and compartments and I slid one of the drawers open and was delighted to see a nest of small squirmy bodies inside. Teeny tiny baby mice that made me think of little fairies.

Oh look! I said to my new stepfather.

And he grabbed the little squirmy mice out of the drawer with one fist and hurled them at the barn wall.

There are some things that are not funny.