Passive Aggressive Postcards from the Edge. (The Haunting. Part One)

A few weeks ago I went on a writing retreat with my writing friend Natalie D. Richards (not her real name) because "Natalie" wanted to get new author photos done and her cousin owns a studio in Marietta, Ohio, and so we decided to turn the photo shoot into a longer weekend of writing.

This will be fun, we said. Relaxing and inspiring and productive, like previous roadtrips and writing retreats we've gone on together...

but little did we know that we would soon embark upon a nightmarish horror journey that we are still trying to make sense of to this very day.

We found a darling little house to rent (which turned out to be haunted, but we didn't know that yet) and we set our suitcases and laptops and bags of fun food and wine treats down, and because it was a lovely, uncharacteristically sunny day, we left the house to explore the town.

For reasons that aren't quite clear to me now, we thought that the rustic looking barn across the street from the darling little house-- the one with the human skulls propped in the windows-- was funny.

Further down the street, we came upon something else that caught our eye, an antique shop with all sorts of fascinating objects outside in the adjacent courtyard. Objects such as a ladder and bicycle sculpture hanging from the trees, and an old wheelchair, and

an animal skull jutting out of the wall. 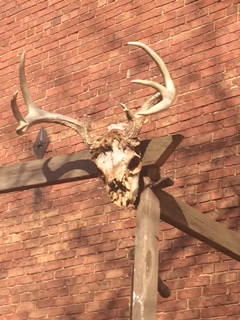 Also, a little boy statue standing in front of a washtub. 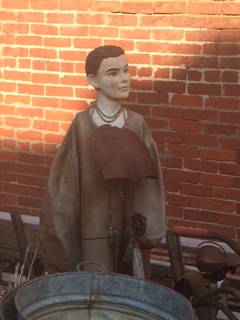 "Hey! Let's go inside this place!" we said. Because we are stupid.

The store sold old furniture and old photos of people, mostly babies, the kind of old photos where you just know that now all of those people are dead.

We were the only customers.

I gravitated toward a wall of old postcards and found one that I thought was hilarious. It was a postcard with a picture of a crying baby that said "WHY DON'T YOU WRITE?" 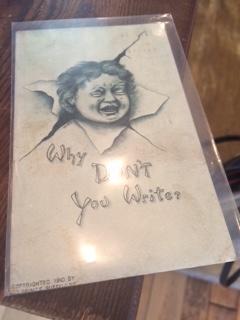 "What a perfect motto for our writing retreat!" I said to "Natalie." And I bought it and took a picture of it and tweeted about it, something clever, I thought, about how this postcard made me think of the beginning of a Supernatural episode, and one of my Twitter friends immediately tweeted back, something like GET RID OF THAT POSTCARD NOW! and I thought that was funny too.

I am going to skip over the rest of the weekend--the photo shoot at the Hot Tomato studio and the burlesque show that "Natalie" and I found ourselves going to, dressed in our Hot Tomato costumes and teetery high heeled shoes, and the fun dinners we had and the walks back and forth across the river on a lovely bridge and our talks about writing and major breakthroughs in our respective writing projects, and also, the hellish two nights we spent in the HAUNTED HOUSE,

and return to talking about the postcard.

It was a real postcard, sent on July 28, 1911 in Zanesville from a woman named Mildred to a man named Moody, and on the postcard, Mildred wrote, passive-aggressively:

Hello. Why didn't you write to me?

I don't know if Moody ever wrote back to Mildred. Or why Moody kept the postcard from Mildred. Or how the postcard ended up, eventually, in the antique shop with the animal skull and freaky child doll in the courtyard. Or, most importantly, why I bought the postcard and carried it around in my purse for three days.

What I DO know is that I got home from my haunted weekend, anxious and exhausted and freaked out, and that night, after telling my husband the entire story, I remembered the silly tweet about the Supernatural episode,

and I put the postcard in the fireplace and set it on fire. 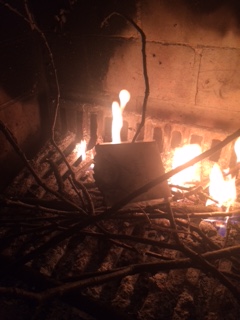 [tune in next week for The Haunting. Part Two.]