I write these words in tiny script so as not to give them more power.

I know what I am supposed to do:

Put my butt in the chair each day, regardless of whether or not I am feeling inspired, and write. Let the story go where it wants to go without forcing it. Set down some words. Any words. Don't put pressure on myself to make it perfect. It's about quantity not quality, or so says Julia Cameron in The Artist's Way.

And I want to believe Julia. (I do!) But still, no matter how hard I fight it, sometimes my critical inner editor, my demanding annoying former English teacher/perfectionist self takes over and I am floundering once again in Writer's Block land

Writers' guides are filled with helpful advice on how to tackle writer's block.

Elizabeth Gilbert in Big Magic speaks soothingly to writers, cooing in our ears to be gentle with ourselves. Frustration is part of the process, she whispers. Creativity is wonderfully difficult and you're doing the best you can. There, there, sweetie.

Steven Pressfield in War of Art takes the opposite approach, shouting like a drill sergeant at us to fight Resistance with everything we've got. Quit whining about how tough it is, soldier! Park your lazy ass at your desk and get to work, damn it!

Daily, sometimes hourly, I pinball between the two opposite poles of Liz and Steve. I show up at my desk with the best of intentions. Set a word count goal. Set a timer. Pound out my words with a sledge hammer. Punish myself when I slow down. That's it! No more bathroom breaks until you hit 1000 words, you amateur!

I sprawl out on my bed and doodle with colored pencils in a notebook. Who needs a word count? Why stress myself out with a timer? I know, I'll do a character sketch! No, I'll build a stage set of this pesky scene out of papermache! Forget that. Let's pause to sing Kumbaya.

And then it's back to my desk and a new word count goal, a frenzy of tapping on my keyboard. 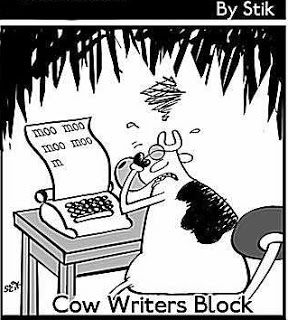