For the past few weeks I've been slogging through my day's writing work-- NO, I DO NOT HAVE writer's block, maybe more like writer's cube if that is a thing. Anyway, each day, as a reward for completing my goals, I've been listening to the Fresh Air podcast.

I love tuning in to hear interviewer Terry Gross talk to actors, artists, directors and authors. The app is cool because you can skip around and choose the episodes you want to listen to.

I almost skipped today's episode: The 'Phenomenon' That Changed MLB Pitcher Rick Ankiel's Life because I never heard of Rick Ankiel and I'm not much of a baseball fan. But before I could turn it off and switch to another episode, the interview started. Rick Ankiel, apparently, used to be this awesome pitcher and now he's got a new book out, a memoir called Phenomenon.

When he was only twenty years old, people were raving about how good he was and he knew it. He skipped past college and signed a million dollar contract to pitch in the major leagues. It looked like he was on the road to having a great career, but suddenly, during a playoffs game, he threw the ball and it didn't feel right.

He had this nightmare game, unable to control his pitches, the ball shooting off in random directions, and all of this happening on live TV, with announcers commenting about it and the crowd booing him. When the game was over, he told himself it was a fluke thing and figured that with a rest, he'd be back to normal.

He couldn't seem to throw the way he had before. He tried everything he could think of to fix the problem. Going back to the mechanics, he called it. Practicing. Watching what other pitchers were doing and trying to copy them. Resting. He couldn't tell if this was a real physical issue, he said, or maybe it was the yips.

(the yips?? This was me, listening to podcast and wondering what the heck the yips were. A pause here, while I looked it up:

The yips is the loss of fine motor skills in athletes. The condition occurs suddenly and without apparent explanation usually in mature athletes with years of experience.)

Back to poor Rick Ankiel...

The yips were destroying his life.

He lost his place in the majors and was dropped back down to the lower levels, whatever they're called in baseball, until he finally ended up on some rookie team, all the while his anxiety about his inability to pitch building and building. He'd drive around watching little kids play baseball and think about how easy they made it look and wondered why he couldn't do it anymore.

Baseball, he said, had been his thing. He'd grown up in a messed up family, his father abusing his mother and eventually going to jail. Baseball was the one thing he really did well. It was his refuge. His escape.

And now here he was hitting this weird psychological wall.

On the farm team, he performed okay. No TV spotlight. No one commenting on his performance for the most part, but he was unhappy. Whatever joy he'd once gotten from baseball seemed gone, and after a while he decided to quit the game.

Which is when a funny thing happened.

His agent suggested he start playing again in another position. This (I guess?) is not the typical career path of a baseball pitcher? but Rick Ankiel thought about it and said he could envision himself hitting a home run and just the thought of that made him feel excited again.

He became an outfielder and a good one. He hit 47 home runs before retiring to spend more time with his family and write his memoir. 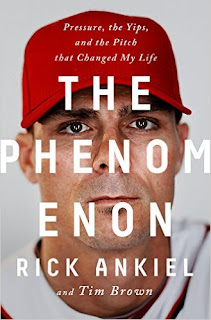 So, anyway, this is why I decided today that I am going to quit writing.

Nah. I'm just joking with you. I don't have the yips

I don't have the yips

I don't have the yips.