Light at the End of a Graduation

Last week I went to my nephew's high school graduation. The school was in York, Pennsylvania and it seemed like a very nice school. Example: when my husband and I parked in an overflow lot and began our long trek toward the building, a woman holding a baking pan and a spatula welcomed us to the school and offered us a brownie. I mean, come on, homemade brownies in the parking lot? How lovely is that?

I get teary at graduations. The band playing Pomp and Circumstance. The kids lining up in their caps and gowns. Their young faces are radiant. You can practically see the emotions scrolling across their features, a mix of excitement and hope, anxiety and fear, but mostly, it's joy. (Okay, I used to be a high school English teacher, so I know that some of that joy is related to them thinking: Woo Hoo! Thank God I am finally finished with high school!!)

My husband and I high-fived our nephew as he walked past and then settled in for the program. Introductions by the principal. Speeches by select students. This is the time, I confess, when I typically tune out and peruse the graduation program, reading the names of the students and seeing what honors and awards they've received, the plans they have for after high school.

The president of the student council stepped up to the microphone and gave the first speech. It was the usual speech you hear at these things. A rundown of fun stuff the class had experienced together over the years, how hard they'd worked, how ready they were to move on to the next chapter in their lives and make the world a better place.

I love the optimism of teens, the sense that the future is bright and their generation won't muck things up like the previous ones have. I want to believe them.

But I am struggling.

The night before the graduation the man running for Congress in Montana physically assaulted a reporter who asked him a question about healthcare. At the same time, over in Europe, our president who was attending a NATO conference, pushed the leader of Montenegro out of his way. I am trying to imagine any other president we have ever had in our country doing this--physically laying his hands on another world leader and pushing him. Obama, Bush, Clinton, the other Bush, Reagan... I can't visualize it.

Something is different. We've taken a dark turn as a country.

My son, who graduated from college last year with a double major in history and computer science, argues with me on this point. Our country has never been perfect, he reminds me, and this particular time is no darker than any other. We went to war with each other once, for example. We've chosen despicable leaders before. In 1856 a congressman from South Carolina beat a Massachusetts congressman on the head with a walking cane.

So yeah, I guess we are somewhat more civilized now.

The valedictorian told a story about switching schools, moving from the city school district to the suburban. Apparently, there is a large income disparity between the two districts, even though the high schools are only two miles away from each other. She talked about how the city kids have art and music classes in a hallway because there isn't enough classroom space, how they have fewer sports and honors classes than their counterparts here, at York Suburban. It's time to acknowledge the unfairness, she said, as members of the audience squirmed uncomfortably, and resolve as a community to do better.

The salutatorian had just came back from a science competition in Los Angeles. She spoke of the amazing projects she'd seen, the many talented scientists she'd met. As a person of color, she was inspired she said, to meet such a diverse group of people from all over the country and the world, already playing a part in tackling the challenges we face.

The class president spoke passionately about a book she'd recently read called Chop Wood Carry Water about the long, arduous, behind-the-scenes and often thankless process that must take place if we want to become experts in our fields. Trust the process, she told us. In the end we will achieve greatness.

Speeches over, the students filed up to receive their diplomas.

The next day, that man running for congress in Montana was charged with assault. He also won his election. The American president practiced his bizarre grippy-tug handshake on the president of France. Meanwhile, in the suburban district of York, Pennsylvania, the newly graduated students woke up to the first day of the rest of their lives, defiantly hopeful.

Remember these names. You will hear them in the future: 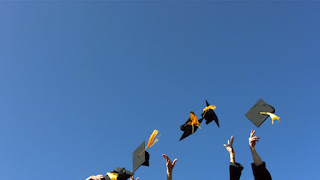 Email ThisBlogThis!Share to TwitterShare to FacebookShare to Pinterest
Labels: graduation, hope for the future, York Pennsylvania.