It's been a while since my first book, Thin Space, came out. Four years and eight months, to be exact. Not that I am counting.

Okay, I am counting.

The first couple of years were a whirlwind of promotional travelling. Book festivals and bookstore signings. Library and school visits. This was my dream come true: Published Author, and I was loving it. In the meantime I was writing new stuff and submitting it, hopeful, sure, that I was set firmly on my much longed for career path, that I'd have a new book out the next year and the next and the next--

But then time kept ticking by and my path took a few unforeseen detours, and suddenly I woke up to find myself wandering around in a random field.

A few weeks ago I was invited to watch a Battle of the Books competition. This year Thin Space was on the B.O.B. list in central Ohio, which meant that I had another round of kids reading it-- and being quizzed on it. Fun fact: when I was a teacher in Lexington, Kentucky, I was the coach for my school's B.O.B. team. A librarian friend and I selected the books and wrote many of the questions. The interested students read all of the books and practiced buzzing in on a quiz show style competition, and let me tell you, the competition was serious. Many of the kids read each book two or three times. They attacked their buzzers with surprising ferocity.

Fun fact #2: my school's team was really good. One year we won first place in the entire district. Another year my team competed against the school where my daughter went and she was on the team and I told her I hoped her team would win, but secretly I was rooting for my own team. (Please don't tell her!)

Anyway, it was a surreal experience to watch a bunch of kids in Ohio buzzing in and answering questions about my book, especially when there were questions that I couldn't answer. (This is a side effect of having a book come out four years and eight months earlier.) After the competition I spoke to the students, answered questions about the book (what I could remember!), and signed their copies. I hung out with one of the teams and the kids asked me if I'd ever thought about writing a sequel.

Fun fact #3: I did write a sequel. Before I sold Thin Space, when I had no clue if the book would ever be sold, I had a cool idea for what might happen next. I tend to struggle writing a book (if you read this blog with any regularity, you will find this statement a comical understatement) but this book was relatively easy to write. It practically scrolled out of me. Who knows why. Because I knew the world of the story already? Because I understood the characters and heard their voices speaking plainly in my head? Because I had sorta given up on the idea of publishing and was writing purely for my own amusement?

In any event the sequel turned out better in many ways than the original. But it's clear to me that it will never be published, at least not traditionally. I'm okay with that. Apparently, the whole write-a-book-purely-for-your-own-amusement thing has an upside.

The kids at the B.O.B. competition were excited about the sequel and wanted me to email it to them. The librarian did them one better. She took my digital copy and printed off and bound copies for her team. She came by my house the other day and asked me to sign them-- a special parting gift for her B.O.B. team-- and she left me with a copy of my own.

It's the only hard copy I have.

I flipped through it later, and the story I wrote many years ago came back to me. The joy I had writing it, that came back too.

Some of my writing friends --the ones who had debut books come out the same year as Thin Space-- are releasing their fifth books this year. It bugs me sometimes, to find myself so far off the path I thought I was ambling along on, to find myself wandering in a field.

But here's something I realize now:

The path may be gone, but this field's a decent place to be. It's got colorful flowers to sniff and lots of nooks and crannies to get lost in. Trees along the edges to climb. A creek to splash through. Birds twittering, and--um...

how long can I keep this extended metaphor going? What's my point again?

Oh, yeah. This place, off path, what I'm trying to say is most days I'm happy right where I am. 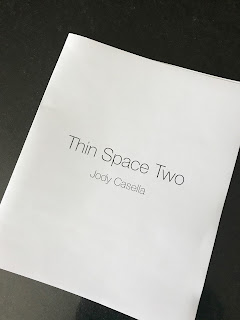 Email ThisBlogThis!Share to TwitterShare to FacebookShare to Pinterest
Labels: Battle of the Books, The Writing Life, Thin Space the Sequel