Dispatches from a Reluctant Activist

The hardest part is the drive downtown, the navigating of interstate changes, the search for a parking garage.

Confession: I live 12 minutes from downtown Columbus. As far as city traffic goes, it's on the light side. But I am such a baby when it comes to driving places, going places, I should say. Last month my husband's car was out of commission and he took mine to work for a week and I didn't even notice. I spend my days in one room for the most part, changing out of my pajamas and robe only to walk the dog. 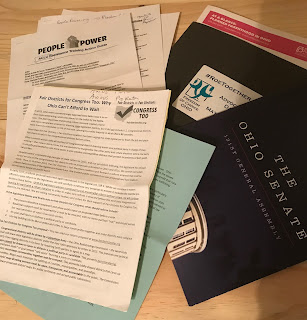 And lately, to drive downtown to protest or to attend meetings or to speak to my state Rep or to my Congressperson or to pass out flyers. Ever since I marched in the Women's March in Washington DC, I made a resolution to Do Something each week.

Last week, for example, I wheedled my husband into marching with me in the Science March. Talk about reluctant activists. This march was a gazillion miles out of the man's comfort zone.

Also, I made it worse by giving him a sign to hold: 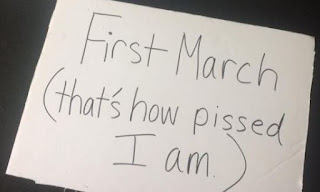 People came up to him, strangers. They said it was their first march too. They slapped him on the shoulder and thanked him for coming out. They asked him if they could take his picture.

It was excruciating for me to watch his discomfort, and finally, I offered to hold the sign, and people stopped me instead and my husband would squirm and say, "Actually, that's my sign."

But anyway, back to why I was driving downtown. It was for an Advocacy Day organized by Freedom of Choice Ohio. When I signed up to go, I had no idea what it was-- some all day meeting?

Turned out, it was a education session of sorts, where different groups spoke about issues affecting women and children and families in Ohio and the impact that legislation would have on them in the coming year. After we had the information, we would march over to the Ohio Statehouse and pair up with a buddy, and meet two-on-one with an Ohio representative to share our personal stories.

The day was alternately inspiring and crappy.

Inspiring, because the speakers were so smart and caring and dedicated and I believe in this cause, that women have the right to make their own medical choices without politicians interfering, that we have the right to plan our families, deciding if and when we will have children, that even the poorest among us have the right to our own bodily autonomy--

and crappy, because it all feels like such a long slog and who knew the democratic wheels turned so slowly, with so many layers and hoops to jump through.

I walked with my buddy, an older woman who seemed very quiet and reserved and stereotypically grandmother-ish, but oh wow, she surprised me when we met with our representative, how knowledgeable she was, and how passionate.

The rep himself, was a very nice guy-- thank you, Steven Arndt for taking time out of your day to listen to us, for sharing your own story and for hearing ours -- My story, for the record, boils down to Me, age fifteen, walking up to the Planned Parenthood in my neighborhood (yes, I really had a PP in my neighborhood-- a ten minute walk away) where I went for medical advice and to obtain birth control, because, oh my God, I was fifteen and sexually active, which is crazy to me now, what a messed up mix of contradictions I was back then-- an honors student at a private Catholic high school, a damaged girl clinging to a doofball boyfriend, scared enough to know that I did not want to get pregnant-- like the girl in my class who was publicly shamed for doing the "right thing" by having her baby.

That girl almost died of pre-eclampsia during her labor. I don't know what happened to her after, what kind of life she's led.

But I know what happened to me. I had opportunities-- college, graduate school and upper middle class life. Eventually, children, who were planned, wanted, loved. Still, I can't forget the poor sad girl I knew and the poor sad girl I was and how different circumstances could've been for me, and how lucky I was to be aware that there was a place I could go, somewhere safe and welcoming and non-judgmental.

All this I told Mr. Arndt and he nodded politely, but who knows how he will vote in the future on these issues, if it was worth his time or mine to have our conversation, if it changed anything.

I didn't know it yet, but the very next day, the Republicans in the House of Representatives would vote to take away healthcare from 24 million Americans. Part of their cruel proposal restricts the right of poor women to choose where they go to receive medical care.

Done for the day, and my new buddy and I walked back to our cars and paid for our parking. (another area of stress for me. How do I get the damn parking ticket to go properly into the slot?!)

We exchanged business cards and smiled at each other. Maybe we'll meet up at another of these things, my new friend said.

Email ThisBlogThis!Share to TwitterShare to FacebookShare to Pinterest
Labels: activism, former chemistry majors who are so pissed off about the new administration's disdain for science that they went to a protest march, healthcare, Planned Parenthood, women's rights