How to Make a Natalie D. Richards Book... (a story in four parts, as told by her critique partner. me.)

Part One opens at a haunted house. It's Natalie's brilliant idea to take a writing retreat in the most haunted town in Ohio--

a quaint, artsy town on the Ohio River, with darling shops and restaurants, an old railroad bridge spanning the river that we walk across several times. The loveliest of cottages to rent (which also happens to be haunted!) Oh, and on the other side of the street from the lovely cottage, a creepy barn with skulls peering out of the windows.

We are too freaked out by the events of the weekend to think much about doing more than praising the heavens that we survived it, but several weeks later, Natalie tells me that she has an idea for a new book...

Idea number one is that freaky bridge we walked across multiple times, the metal beams and the precarious-looking slats beneath our feet. The clusters of locks, each one etched with the initials of long ago romances. 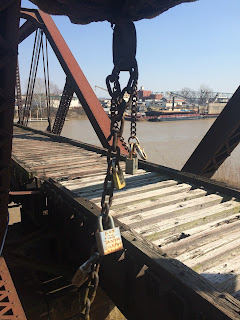 Idea number two is a broken boy. "His name is Theo," Natalie tells me. "And I'm trying to push him away,

because I know he's not a parent-approved hero. He has ADHD and Oppositional Defiant Disorder. Honestly, he's a bit of a mess. But he's breaking my heart, Jody," she says, "and I can't stop thinking about him. About the way people see him and talk about him, and never see the rest of who he is.

Maybe it's messier or more difficult, but kids like Theo feel all the things other teens feel. They have hopes and dreams. They fall in love. I want to write him," she says, "because I can't not write him. I know his story deserves to be told."

So, I say what any good critique partner would say: Go write it!!

Which leads us to

Here is a fun thing Natalie and I do every single weekday morning:

She calls me on her drive in to work and after giving me an update on the horrific traffic and her daily fun swing through the Starbucks drive-thru so she can get a peppermint mocha, we talk shop. I tell her what's going on in my WIP and she tells me what's going on in hers. (Okay, we also talk about our kids, our husbands, our dogs, and the latest crap news we've woken up to and how we are supposed to write books in this world, but then inevitably we move our conversation back to writing because it is what we do.)

The book she's writing is called "The Haunted Bridge Book."

And it is stressing Natalie out. She's got the boy, Theo, in all his broken-ness, and messed-up-ness figured out, but she's struggling with the girl. Her name is Paige and she's got a secret crush on Theo but Theo's done something terrible to her. Not sure what yet.

And then, omg, Natalie knows what Theo did. And it's horrible. Will it work? Can she write this book? My guess: yes. Because Natalie, I've come to learn very quickly, is a master at writing books.

Not that they spill out easily for her. We spend the next few months in daily discussion about Theo and Paige. There's lots of anxiety involved, in the writing of it for Natalie and in the character of Paige, who, interestingly enough, is consumed by anxiety, about food, about germs, about her parents and their expectations for her, and especially about Theo and what he did to her...

We work through plot holes and structural problems. Character motivation. Roadblocks. What happens next? What the heck IS this book, anyway?

After roughly four months Natalie finishes the first draft, and--

she sends the file to me to read.

I LOVE being one of Natalie's first readers. I am a fan of her books and even though I have talked with her through the play-by-play, behind the scenes, piecing together of the manuscript, it's always cool to sit down and open her file for the first time.

I write comments as I read. Mark passages that are strong, and flag places where I am tripped up. There's a moment about two thirds of the way through, where I feel like we've mind-melded. I'm in her head and she's in mine. I see the book on the page as she's written it and I know the story that she's trying to tell. I sense where it's falling slightly short and I can pinpoint where she's hit it exactly right.

We have more phone conversations. We send flurries of emails back and forth.

She goes back in for round two. Round three.

Time passes, and the book is out of her hands, the publisher and book designer and cover artist and marketing people doing what they do. Natalie's writing another book. We talk on the phone. We puzzle through plot holes. We analyze possible character motivation.

Today, she's working through a traumatic kiss scene. The traffic into the city is bad. Our kids are worried about the state of the world. Forget the Peppermint Mocha. She is going all in on the new Maple Syrup Pecan Latte at Starbucks.

Her book We All Fall Down is officially out in the world. In bookstores. In libraries. On Amazon. I still call it "The Haunted Bridge Book."

The cover is gorgeous, don't you think? 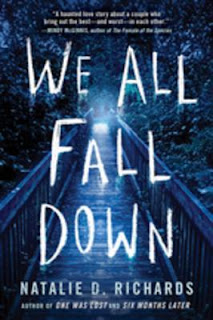 But here is what I picture: 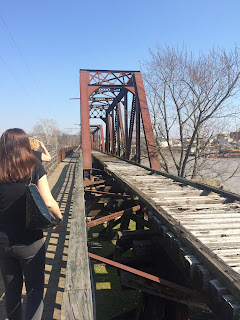 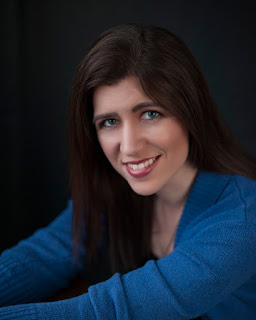 Lifelong Ohioan, Natalie D. Richards, spent many years applying her writing skills to stunningly boring business documents. Fortunately, she realized she’s much better at making things up, and has been writing for teens ever since.

A champion of aspiring authors, Richards is a frequent
speaker at schools, libraries, and writing groups. She lives in Ohio with a Yeti, a Wookie (her dogs) and her wonderful husband and children.

Where to find Natalie:

And here's a teaser for We All Fall Down...

Theo's always been impulsive. But telling Paige how he feels? He's obsessed over that decision. And it's time. Tonight. At the party on the riverbank, under the old walking bridge, site of so many tales of love and death.

Paige has had a crush on Theo since they first met, but she knows her feelings are one-sided. She's trying to move on, to flirt. A party at the river is just what she needs. Except a fight breaks out, and when Paige tries to intervene―Theo's fist lands in her face.

All Theo and Paige want to do is forget that fateful night. But strange events keep drawing them back to the bridge. Someone, something is determined to make them remember...and pay for what they each did.