I want to write about my grandmother

and how she always had something cooking on the stove when I dropped in to see her,

which was rarely, even though she lived in the same town I did. How what was cooking always scented up the place, in a good, home-cooking-Italian way, so that you could smell the spaghetti sauce or the chicken noodle soup simmering when you were walking down the hallway of her apartment building, before you even made it to her front door.

I want to tell you about how tiny my grandmother was, under five feet tall and less than one hundred pounds. How she always had reddish brown, perfectly coiffed hair even though she was old, and how I always thought that was her real-colored hair until one time I mentioned to my mother that Grammy was the only grandmother I knew who didn't have white or gray hair, and my mother laughed and said,

I want to talk about how whenever I went to visit my grandmother, she'd reach up and hug me, rocking me back and forth and squeezing me tighter than you'd think a one-hundred pound old lady could squeeze. How we'd sit at her kitchen table and she'd feed me the spaghetti or the chicken noodle soup and tell me about her latest health ailments and show me all of the medications she was taking, pointing out what each one was and what it was for, before moving on to describe her various projects, all of which involved cleaning.

Dusting out the cabinets or scrubbing the bathroom tiles or disinfecting the inside of the communal washing machines in her apartment building. Cleaning was one of my grandmother's favorite hobbies.

That, and watching soap operas.

She called them her stories and when I was visiting, after I'd eaten, we'd sit together on her couch and watch whatever show was on until it was time for me to go and we shared another round of bone crushing hugs.

I want to write about how happy my grandmother was on those visits, even though her world was shrunken down to a very small world, it seemed to me, of food and perfectly coiffed hair and medication schedules and cleaning projects and TV programs.

I never knew what my grandmother's political views were, if she even voted; although, once she told me that Italians should be forgiven for supporting Mussolini. He made the trains run on time! she said. And I nodded, cluelessly.

We never talked about religion either. She was Catholic but I have no idea how devout--or not devout--she was. Probably more on the devout-ish side, considering she had a little altar set up in her apartment, on the top of a dresser. A picture of Jesus. Photos of dead family members, my father's picture always in a prominent place surrounded by burning candles.

My grandmother never told me who she was afraid of or what she worried about, unless it had to do with her health. Or maybe one of her children. One uncle of mine was always in and out of jail, which my grandmother referred to as college. As in, "Ah, well, your uncle is away at college again."

Once my grandmother told me a story about how when she was two years old, her family went to Italy for a visit. Her parents had been born in Italy and several of her older siblings had been born there, but my grandmother was born in America. When the family was coming back into the country, they had to pass through Ellis Island, (I'm a little confused about the reasoning for this now) but anyway, there was a moment when an immigration official wasn't going to let the family back in.

Someone was sick. Maybe they all were. None of them could speak English very well, but the parents pleaded with the immigration officials. The gist of their argument was that my grandmother, aged two, was an America citizen, and therefore they should all be allowed into the country.

Apparently, it worked out.

My grandmother lived in a time before the internet and social media, before Fox news infiltrated elderly people's homes and told them what to be afraid of and which people they should hate.

Maybe I am doing that annoying thing that older people do, glossing over the past and saying:

It was better back then!

when the worst thing a person could worry about seeing on TV was a ridiculously over-dressed couple rolling around together in bed, when we had no idea what our family members' appalling prejudices were, when a big secret meant someone wore a wig.

Now I don't know remember why I wanted to write about my grandmother.

I think of her sometimes when I have sauce simmering on the stove or when I take medication or have my hair colored or on those extremely rare occasions when I clean my house.

And always always when I reach up to hug one of my very tall children, when I squeeze them tight, when I let them go. 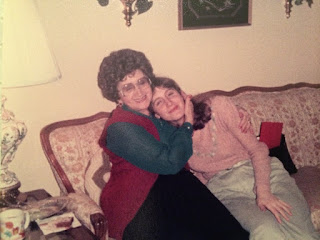