I used to do this thing whenever I was stuck working on a book, where I'd click out of the file and open a desktop solitaire game. One game, I'd tell myself, and I'd start playing, watching the cards flip, half zoning out as the suits matched up and aligned,

until I won or lost,

and then I'd play again. And again. Until a half hour went by. Or an hour. Or more, even, and each day I'd tell myself, I AM NOT OPENING THE SOLITAIRE GAME TODAY and then I would open the solitaire game because there was the little colorful icon smack dab in the middle of my computer screen

and I was feeling lazy and crappy about myself

until one day, I deleted the game from my computer. 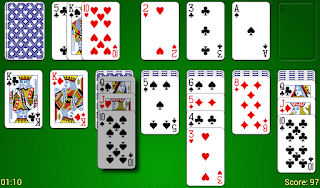 half zinging with rage, until a half hour goes by or an hour or more,

and I feel lazy and crappy about myself, alternately enraged and powerless, knowing I need to stop but then feeling

guilty, because shouldn't I be a good citizen and know what's going on in the world, and who am I to turn off social media and retreat into a quiet safe bubble, and isn't that just so privileged of me to get to do that when other people don't have the luxury

until it hit me that I am playing solitaire again,

but a million times worse, because there is no end to this game and sitting here in front of the screen, eyes glazed over, is not helping anyone

Plus, I'm not even getting my writing done.

It's time, I know, to delete the game.

So, last week, I took the necessary steps. I deleted my social media apps from my phone, and had a momentary flare-up of panic, and then I laughed, because I was remembering this time maybe fifteen years ago when my son's school sent home a paper saying it was Turn Off the TV Week and I told him and his younger sister that I thought we should try it, and my son argued with me and his younger sister literally flung herself on the floor and had a tantrum, and I stood looking down at the two of them, thinking, Hmm, some people are addicted to watching TV.

My son, now grown up and working at Facebook of all places, and my daughter, away at college and super adept at managing her social media, both gave me pointers for limiting my usage, such as

turning off all notifications and setting up Do Not Disturb on my phone and OH MY GOD MOM why do you have Yahoo News as your homepage??!!

and I stumbled upon an app on my own called Stay Focused, which is awesome, because it's free and you can block sites and set up parameters for yourself and when all else fails and your finger's getting very itchy to click,

you can detonate what they call The Nuclear Option, which shuts down all websites and it's a beautiful beautiful thing

just as pleasing, if not more so, than deleting that silly solitaire game all those years ago.