Goal Setting at the Edge of the Earth

It's January, a new year, my usual time for looking ahead, making resolutions, setting my writing goals and other goals-- projects to tackle around the house and in the garden, resolving to eat better and exercise more and volunteer and contribute to the community in a positive way, reading my poem a day and reading more, in general, and in a variety of genres.

I can go on and on with these goals, because I am a big believer in setting them, making lists, and tracking progress, all of which, I realize, lately, relies entirely on my faith in the future,

that I will be there, in the future

that there will be a future.

It's a scary realization, one that I haven't felt in a long time, but lately it's come back to me, how nothing is certain, how my fate-- how all of our fates-- are dependent on forces beyond our control, a feeling I understood instinctively when I was fourteen, fifteen, sixteen years old.

Back then I didn't have much faith in the future. I wasn't a big-time follower of the news, but a lot of it filtered into my head anyway, news about the arms race between our country and the Soviet Union, the Cold War amping up.

I watched the movies about nuclear war, The Day After and War Games, listened to music where rock stars wondered if the Russians loved their children too, read about downed airlines and uprisings in Eastern European countries, heard stories about nuns chaining themselves to fences outside nuclear weapons plants. 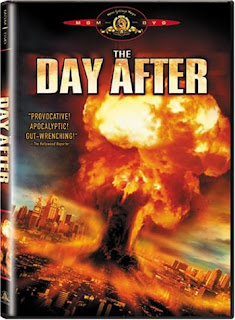 In the 1980's we were wise enough to know that if there was a nuclear war, no one was going to stumble out of it alive, and we mocked the deluded people of the 1950's who had disaster drills in schools, the kids told to hide under desks, as if cowering under a desk would save them.

I'm not saying I thought about potential total annihilation every moment, but it was hovering in the back of my mind, the near certainty that something really bad could happen at any moment-- on purpose or by accident--

and we would all be done for.

So, why bother studying for the SATs or doing your homework or making any plans, really?

But the thing is I did study for my SATs (not that it helped all that much since I was pretty dingy when it came to taking standardized tests). And I always did my homework. I applied for part-time jobs and filled out college applications. I moved forward as if the future would be there for me,

and, what do you know? it was.

Which I guess is my long way of saying that I did set my goals for the year 2018, because while I know there is no certainty that we'll all make it to the end of it, I am going to move forward as if we will.

For the record, my goals:

1. finish the revision of my middle grade novel
2. jump back into the adult novel I set aside last spring
3. write four blogs a month, plus one over at YA Outside the Lines
4. read a poem a day; read more, in general, in a variety of genres
5. eat better and exercise more (10,000 steps per day according to my Fitbit!)
6. paint the exterior of the house
7. expand my herb garden
8. volunteer and contribute to the community in a positive way (in Real Life as opposed to on social media)
9. take monthly dates with my husband
10. remember to live in the moment, which is all we truly have.