When I was a kid, I always knew when it was Martin Luther King Day because it was the same day as my brother's birthday. In the 1970's in Connecticut, January 15th was a state holiday, so we always had off from school.

I liked Martin Luther King Jr. because he was the man who had a dream that black kids and white kids could someday be friends, and if you'd asked 8 or 9 or 10 year old me, I would've told you that it was a dream I fully agreed with.

I'd seen the film Roots at the library in weekly installments. It was clear to me that slavery was evil and all of the white people who'd owned slaves were bad. But that was all in the past. And in the South. We, in the North, were completely blameless. When I was a kid in Connecticut we didn't talk about race.

And it was really easy not to talk about race because the town I lived in was nearly all white.

It was an old factory town, mostly second or third generation immigrants from Poland and Italy, and with a sizable group of people from Puerto Rico. Many kids I knew spoke another language with their parents at home. The Catholic churches in town still held masses in the language of the people in the neighborhoods. Polish, Italian, Spanish.

Not that we were always nice to each other. I heard people openly talk about Puerto Rican people using derogatory language, and everyone said you should steer clear of their neighborhoods. But no one thought of themselves as racist. That was something that only happened in the South. (See Roots, above.)

When I was thirteen, I met a woman from the South and I eyed her suspiciously for signs of racism, but the woman seemed really nice and we all thought her Southern accent was darling. Okay, there was one incident when we were walking in the park, and she suddenly whisked her young daughter away and made the remark that maybe all of us were used to seeing "that kind of thing" but where she was from they weren't used to it.

I had no idea what she was talking about, but later my mother told me that what upset the woman was a couple holding hands, a black person and a white person.

This was a confusing moment because the woman seemed so lovely, and I didn't know what to make of it, so I filed it under: Weird Stuff People from the South Say, and forgot about it

until I went to college in the South.

My college roommate first semester was black, and I was eager to show her that I was Not a Racist by never having a conversation with her about race, and by acting as if I didn't notice that I was white and she was black, hoping that she could see how Progressive and Open-Minded I was. Anyway, this was the 1980's, and even though we were going to school in the Deep South, racism was a Thing of the Past,

which, okay, true, like my Connecticut town, this college was mostly white.

Also, most of the female students joined sororities, and it was an unspoken fact that black girls didn't belong to any of the sororities because it was against the sorority rules,

although the story was that one sorority had pledged several black girls a few years before, but half of the white girls dropped out that year, which killed their membership numbers, and now that was sort of the meh sorority on campus. Anyway, the very few black girls at the college didn't bother going through Rush after that, including my roommate.

I did though, and my roommate and I pretended to each other that she just didn't want to Go Greek. She dropped out of school at the end of the year and I never saw her again.

Here's something I understand now that I didn't when I was growing up: lovely people can be racist. Some of them can even be from Connecticut. 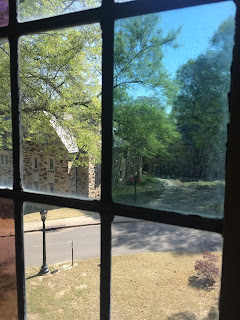