Something of a Radical

Last week someone called me a radical.

Okay, it was my husband, and I think he meant it in a nice way?

Because I march in the women's marches and make calls to my representatives? Because I've been to ACLU meetings at stranger's houses and talked to the person who is running for Congress in my district and met face to face with a representative at the Ohio Statehouse and told him my story about how Planned Parenthood saved my life? Because I parked myself at the Farmer's Market with a petition to end gerrymandering in Ohio and persuaded random people to sign it?

My husband may have a point.

The funny thing is I wasn't always a radical. When I was in college, I barely read the news. I didn't vote. When I saw kids protesting on campus, a small gathering of the fringiest of the fringe carrying signs against Apartheid, I hustled by fast, averting my eyes, thinking, What a buncha weirdos.

and then off I went to a frat party. Once, when I was home for the summer and working at a law office downtown, President Reagan came to speak in the town square. I hadn't known he was coming. My mother was dropping me off at the law office, and she had to let me out blocks away because the entire downtown was cordoned off.

I was annoyed, and then afraid, when I had to explain to the Secret Service that I was trying to get to work, and then having my purse searched and wanded with a metal detector. At lunchtime, in the law office, one of the attorneys said, Let's go hear Ronald Reagan, and I shrugged, but went. There was a huge crowd and I stood there bored, not listening to the speech,

and then I was mortified when the attorney, a young woman only a few years older than me but light years ahead in maturity and education, began to boo loudly. The people around us threw us both dirty looks and shifted away, and I shifted away too because that attorney was the radical.

Except okay,  I did write a letter to the editor of the newspaper when I was fifteen in support of the Equal Rights Amendment, and another person wrote back and called me out by name, basically saying I was an idiot for wanting women's rights. It turned out that the person was my history teacher,

a nun at my school, and she berated me in class and said in so many words

I was a radical. So, maybe there is some truth to the label? 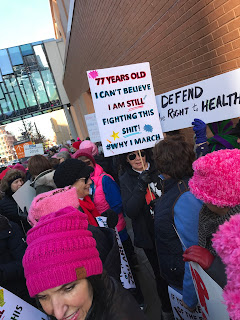 Yesterday I rode with a friend downtown and marched on the snowy wet sidewalk, carrying my NO! sign, shuffling along with hundreds of other people, old women and men, younger women and men, some of them pushing babies in strollers, the babies wearing adorable pink pussy hats -- and I still CANNOT BELIEVE I AM WRITING THAT WORD, or saying the word SHITHOLE, but here we are,

being led by a sick man, an emperor with no clothes, and who knew there were so many people too cowardly to confront him?--

But yesterday, at least, there were some of us marching to the Ohio statehouse --where our leaders have recently been passing laws that seem like a page out of the Handmaid's Tale--

all of us shouting and waving our signs, chanting my favorite chant, which seems like a radical statement these days, but that's okay because

I am a radical.