Close Encounters of the Human Kind

I like it when the little kids toddle in, their snowy boots, their hats slipping over their eyes as they peel off their mittens.

I remember those snowy days with my own kids, how hard it was to get them coated up and out the door and car-seated into the minivan. All the stuff you had to carry. Diaper bags and wipe-ys and tissues for runny noses. The dolly toy my daughter sucked on so fiercely she lost her face. The dolly. Not my daughter. 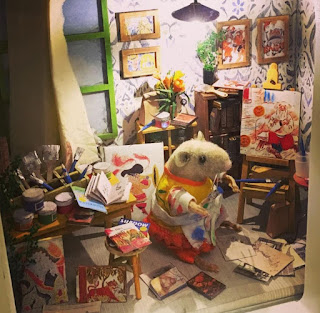 The kids kneel down in front of the mice holes first and I kneel with them because I like to point out the teeny blue paint brush the mouse is holding and the paintings he's been working on and the mess he's made, but that's okay. He's an artist. Sometimes the mouse is a she.

Is she real, they ask me.

And when I tell them, yes, they believe me.

Outside the bookstore the world is awful and growing awful-er or maybe it's always been like this and I only know it more now because the news scrolls out of my phone endlessly.

Did you know a man hated his ex-wife so much he killed their two children when he was on the phone with her? They executed that man last week and his wife watched him die and I wish I didn't know this and I am sorry I shared it with you.

My favorite book in the bookstore this week is a book called Ball. It's the story of the most darling adorable dog and how he keeps trying to get someone to throw him his ball. This favorite book is tied with the books How to Put Your Parents to Bed (hilarious) and After the Fall (the story of what happens after Humpty Dumpty fell and how he conquered his fear of heights. It's an inspirational tearjerker. I'm not lying)

The other day two pre-schoolers gathered up every stuffed animal on the book shelves and lined them up on the couch and read books to them while their harried, apologetic mother nursed a baby sibling.

Eh, whatever, I told her. Don't worry. I've been there.

All those days nursing my daughter, her three year old brother dropping books on her head or legoes or matchbox cars. He wasn't used to sharing me with someone else and my heart broke for him at the same time I was saying, Just a minute. Give me a minute. The TV was on and the news broke in:

A shooting at a school.

I watched a stream of teenagers fleeing a school called Columbine with their hands up and I turned off the TV fast and burped my baby and played legoes with my three year old, freaked out, thinking about my own teaching days (only a few months before quitting to stay home with my new baby) and never ever ever did I worry about a student shooting up the school.

Did you know that there were "11 school shootings in the last 23 days, which is more than anywhere else in the world, even Afghanistan or Iraq"?

I don't want to know this and I am sorry I told you.

A boy reads a book curled up on the couch. A father teaches his daughter how to play chess. A grandmother comes into the store with her grandchild and I show her the book How to Babysit Your Grandma and she reads it with her grandchild on her lap. A mom comes in with her son and I point out the book Dragons Love Tacos. Later I hear the little boy giggling as she reads it to him.

Last week a father in Kansas, a professor, a respected man in the community for over 30 years was picked up by ICE as he was taking his young child to school. He's going to be deported back to Bangladesh as an example to other immigrants. (If the first thing that crosses your mind when I tell you this story is that the man should've taken care of his paperwork, please don't tell me. I don't want to know this cold-hearted thing about you.)

Last week we hosted a bookclub at the bookstore and a dozen kids read from A Wrinkle in Time. It was my favorite book as a kid and I still remember the story. How it was a dark and stormy night and Meg's father had been taken away and she flew off to rescue him with her younger brother Charles Wallace.

It was really bad where their father was being held. A dark place where evil had taken over and even good people had been sucked into it, and to make matters worse, It took Charles Wallace. In the showdown the once darling brilliant beautiful boy tells Meg he hates her, and she is horrified and enraged, thinking

there is nothing you can do to fight hate like that.

Oh my God so many girls took the stand last week and told the world how their gymnastics doctor hurt them, one girl after another, telling her story, shaking and crying, and even now there are men and women closing their eyes to it and saying it didn't happen or it wasn't that bad or why did they wait so long to tell or maybe they are lying and

I could hate these people.

Did I tell you about the teeny mouse painting a picture in the bookstore where I work? Did I tell you that the artist who created it is named Sharon Dorsey? She works at a place called Open Door Studio where she helps artists with disabilities create and sell their art.

Did I tell you that the first time I read A Wrinkle in Time I cried? Not in sadness, but from relief and joy.

It turns out there is a way to triumph over darkness:

and I am happy to share it with you. 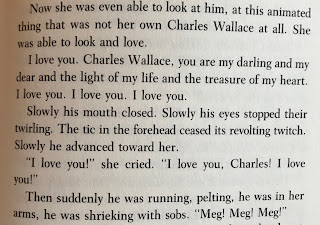 Email ThisBlogThis!Share to TwitterShare to FacebookShare to Pinterest
Labels: A Wrinkle in Time, art, Ball, bookstore love, Cover to Cover, the healing power of love