They are better writers than I was at their age. They come into class with entire worlds in their heads, casts of characters, sequels.

Some of them already know about story arcs, three-act structure, internal vs external conflicts. Did I tell you they are in middle school? I'm not sure what I can teach them. I stand at the head of the room, looking out at the expectant faces and fiddling with my powerpoint, wondering if I'll have to adjust this lesson.

The exclamation point makes it seem more exciting than the reality.

The reality is it's just you and the page, day after day, one word following another, nevermind the deleting, the two steps backwards for every one small step forward, the slow slog weeks that seem to add up to nothing,

and most disheartening, the finished pieces that may float forever in virtual file folders on your old computer.

But I won't tell them any of this. I'm supposed to inspire them! Share my secrets! Impart wisdom!

The funny thing is that I do feel somewhat inspiring and wise as the class goes on. I show them pictures of writer work spaces, snapshots of author writing processes. The post-it notes and index cards and scrawled papers tacked above laptops. I tell them how William Faulkner wrote out the outline of one of his novels on his bedroom wall. I mean, how else do you keep all of the movable parts of a book straight?

What I want them to know, what I wish I'd known, is that there is no one way to Do this. And if a particular method worked for you before and doesn't seem to work anymore, it's okay to try something else.

Look at me. Over the years, I've set word count goals. Scene goals. Time goals. I've written straight through fast, sprinting through a draft without revising, and later sifting through that mess, pulling out the few decent pieces and starting all over again from page one.

I've revised as I wrote, battling each sentence into perfect submission before allowing myself to move on, and later deleting pages and pages of pristine prose.

I once wrote an entire book in pencil. I've outlined beforehand and outlined after-hand.

This year the book I'm writing is happening in 120 minute-per day increments. For some reason I've been lighting a candle before beginning. Now, the strike of the match means it's time to write. I burned through a cranberry-scented candle before Christmas and moved on to other flavors-- rose, cinnamon, vanilla, throwing the discarded matches into the empty containers.

As the class goes on many of the students admit that they have never finished writing a book. They work out their stories in their heads. They type out big chunks and then lose interest as newer, shinier ideas take hold.

What's the secret, they want to know.

And I wish I could explain it. There is no secret. Just, a few minutes a day. One word tapped out after another. A match burning and tossed into a spent container. 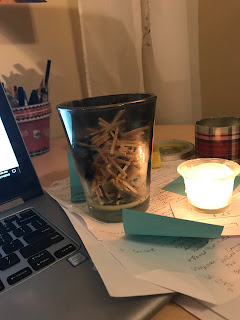