Twenty six years ago today I was cleaning my kitchen

I don't remember if it was particularly dirty. All I remember is I had the uncontrollable urge to clean it. I am talking clean clean, the kind where you fill a bucket with sudsy, hard-core cleaning detergent and get down on your hands and knees and scour the corners. We had a big kitchen back then, bigger than any kitchen we've had since, come to think of it, so there was a lot to scour.

I was channeling my cleaning-obsessed Italian grandmother, scrubbing out the oven and emptying the cabinets so I could rid the dark edges of any dropped crumbs. And then I moved on to the bathrooms. It was a Saturday.

Every once in a while my husband would poke his head into whatever room I was presently scouring and say, hesitantly, So, um, are you finished yet?

At some point he dragged me outside to take a walk. We had a loop we used to do around our neighborhood. It started in our humble subdivision and reached up into a much fancier section that seemed like would be forever out of reach for us. Our habit after we both got home from work was to take this same walk. My husband was big into goal-setting and planning. He would say stuff like, What's our five year plan? What's the ten year? Twenty? Thirty?

I used to laugh at him. As much of an imagination as I had, I couldn't project out that far. We were twenty-six and twenty-five years old and had been married for three years and had just bought a house, things I couldn't have foreseen five years before. Five years before, I was, to put it plainly, a mess. The fall of my senior year in college I was in a dark place.

The truth is, I was suicidal. I mean, I was seriously thinking about how I would do it. The only thing that was saving me was that I was too tired. I remember going to bed one night and feeling like it was the end. I wanted only to stop the pain I was feeling. I wasn't afraid of death anymore and I couldn't imagine anyone would miss me if I were gone. Some part of me knew that this was an all-hands-on-deck situation because I started to pray. I am not a praying person, but that night I did. The prayer was a simple one:

Help. Help me understand why I should want to stay in this world.

The next morning I was exhausted and wrung out. I walked to class, stopping on the way to get the mail, how I always did, even though most days there was no mail. That morning there was a letter from my favorite professor. He was on sabbatical for the year and had never written to me before.

It was a strange out -of-the-blue letter. Basically, he said he'd been thinking about me and wondering if I was doing okay. He said, I hope you realize you have a lot in you that's wonderful.

After I read the letter it was like a veil lifted, and suddenly, I wasn't in a dark place anymore. I was outside looking in on myself, thinking very logically about my future, a future that the night before I could not envision.

I still couldn't envision it--at least not the particulars--but I knew with a weird degree of clarity that I could keep going. I could grow up. I could meet someone, get married, have a job, buy a house, have children...

Instead of dread and sadness and anxiety and fear, I felt curious. I wanted to hang around for the things that were potentially going to happen.

A few weeks later I met the man who would become my husband. Flash forward five years, and we are walking around our neighborhood where we've bought our first house. I've just finished scouring the entire place. "Oh, I understand now," my husband told me, "All of this cleaning. It's like the What to Expect When You're Expecting book says. You're nesting."

It turned out he and the book were right. That night we rushed to the hospital. In the morning we welcomed our first child into the world.

Tomorrow, he will be twenty-six years old. 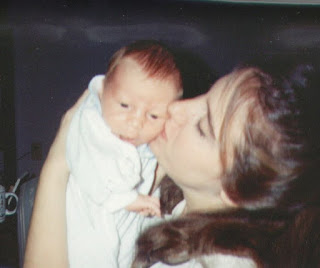