In my younger and more vulnerable years

my father gave me some advice I have been turning over in my mind ever since. "Whenever you feel like criticizing anyone," he told me, "just remember that all the people in this world haven't had the same advantages that you've had."

I didn't write these lines.

But if you're an American literature geek like I am, or someone who was mildly awake during a high school English class at some point in your life, you might recognize where the lines come from. It's the opening of The Great Gatsby by F. Scott Fitzgerald. I know these lines (and the last lines of the novel, as well as several other passages) by heart because I have read the book at least fifty times. 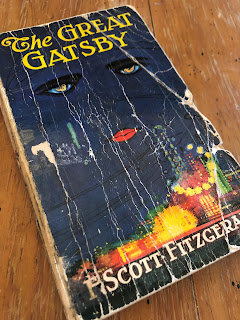 Look! That's my copy from that class and the same copy that I read the 50+ additional times.When I was a high school English teacher, I taught the book to my classes of 11th graders. I just now thumbed through it and saw both of my children's names written on the inside cover below my name, their notes from their time reading the book in school, scrawled next to my own notes as a sixteen year old and later as a teacher.

When I was sixteen, I think it was the romance that drew me in, the obsessive love Gatsby had for Daisy, but more, it was his yearning, his dreams, his desire to make himself over into someone who would be worthy. And the tragedy of it all when we find out that it none of it was enough.

Still, all of that striving was worth something regardless, right?

That's how Mr. Fay taught Gatsby anyway. We also had discussions about the class system in America, corruption, wealth, the American Dream, and the Jazz Age. And then we watched the kinda dumb movie with Robert Redford, who was too pretty and polished to be Gatsby and Mia Farrow, who was too drippy and blah to be Daisy. Or maybe not. Daisy was at the core fairly drippy and blah.

Gatsby's a good book to teach to high school students, for a variety of reasons, I later learned, when I taught it to roughly 800 students over the years. It's only 182 pages-- with nine chapters, something you can easily cover over a two week period in an average classroom. Also, to snag the attention of your students you can play up the mystery, the romance, the bling, the murders. Trust me when I tell you that in the classroom, in terms of keeping teenagers awake, Gatsby easily beats out The Scarlet Letter, another book I've read 50+ times.

And then there's the fun symbolism that all English teachers love: the green light at the end of the dock, the eyes of Dr. T.J. Eckleberg, and what's the deal with Daisy crying over Gatsby's beautiful shirts? So many fun essay questions...

Oh, and the book holds up under multiple readings-- which is good for the teacher having to read it 50 times-- because there are always interesting details to puzzle out. The cuff links made out of molars, Myrtle's pathetic dog, the weird interlude with Nick and another man at a party, the shitty book that Tom's reading about white supremacy.

I can go on and on. And recently, if you've talked to me, I have been going on and on about it. There's a book out about Gatsby that I've been listening to on audio written by Maureen Corrigan. It's titled appropriately So We Read On: How the Great Gatsby Came to Be and Why It Endures.

Maureen Corrigan is a book reviewer on NPR's Fresh Air and for the record, she is my favorite book reviewer, mainly because I love her voice. It's not "full of money" (Gatsby fans will recognize the reference) but I would venture to say that it is "full of books." 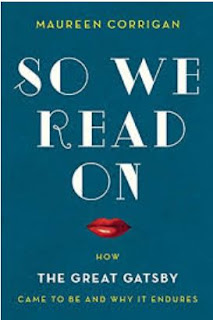 Before I started listening to Maureen (can I call her Maureen?) talk about Gatsby, I wondered what she could possibly say to me that I didn't already know about the book.

I don't know who's left reading this blog post at this point, if there are any other people like me who are in the exact center of the Venn diagram of People Who Have Read Gatsby 50+ Times and People Who Love the Sound of Maureen Corrigan's Voice, but if You are one of those people, I beg you to please check out the audio of this book, so we can chat.

I will end this post with-- what else?-- the iconic last line of Gatsby:


So we beat on, boats against the current, borne back ceaselessly into the past.