It's not often that I am surprised by a new writing technique. I thought I had heard them all, tips and tricks for writing through a first draft, breaking through writer's block, tackling a revision, you name it. I love hearing how other writers Do This.

A few years ago I was on an author panel with the lovely Edie Pattou, author of East, West, Ghosting, and Mrs. Spitzer's Garden. Edie hand-writes all of her novels, drafting in notebooks in the mornings and typing out her work in the afternoons. This idea was fascinating to me because I'd never hand-written a book. Even when I was in middle school I banged out my stories on a typewriter.

But something I've learned over the years is that if you're stuck, it never hurts to try another way In. Hand-writing in pencil in a plain composition notebook, inspired by Edie, was just the trick I needed to break through a particularly painful revision.

Unfortunately, this method didn't work for me on my next project. Another thing I've learned over the years: each book may want to be written in a different way. I know writers who figure out their process and they stick with it forever and God loves those people, but many writers I know have to try a new strategy every once in a while.

So, if this is You, and you're stuck, I may have just the ticket:

Dictate the story to yourself.

This gem comes straight from my friend Kristy Boyce, a YA author AND psychology professor AND mom. At our last meeting with the local SCBWI group (where Kristy is the Social Media Coordinator) she mentioned that because she is very short on time, how she writes her books is "Walking while talking into her phone." 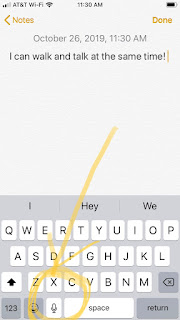 How it works is you go to your Notes feature on your phone, start a new draft of a note, click the microphone icon and talk away. What you say is transcribed (sometimes not quite accurately, so be careful with that) and then you can email the transcribed file to yourself, a file that can then be copied and pasted into your Word doc.

When Kristy explained this to our group, I was immediately excited about trying it.

Cut to: Me, the next day, walking the dog. I looked around to make sure no one was in earshot, and off I went, "telling" myself the scene I was working on. Dialog, description, even pointing out where to add punctuation. A twenty minute walk gave me 300 mostly usable words to work with later.

I admit I did feel a little strange doing this. And very self-conscious. But there was also something weirdly natural about it too...

And then it hit me why this idea did feel so natural. I used to write this way! Way way back when I was eight, nine, ten years old and kind of a weird little mess of a dreamy kid, I used to tell myself stories. I did this when I was walking to school and home, alone, whispering or maybe not whispering to myself. I have a vivid image of talking in third person, describing what my made up people were doing and saying. I think I waved my hands around while I was talking too, so I am sure if anyone happened to be driving by, they would wonder what the heck that strange little girl was doing.

I wrote some of these stories down, but mostly, they were for me.

And after all, what IS writing, anyway, but telling ourselves a story? 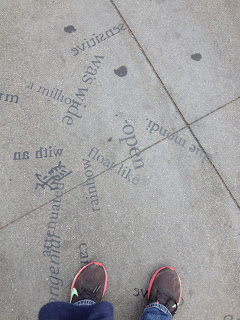 Email ThisBlogThis!Share to TwitterShare to FacebookShare to Pinterest
Labels: first drafts, talking to yourself, walking