The joke over the summer around my house was me misplacing my phone (a daily, sometimes, multiple-times-per-day occurrence). Whenever it happened, my daughter would sing the line from that glorious Lizzo song Where the hell's my phone?

Then we'd do the iPhone Find My iPhone search and a buzz would come from under the couch cushions or buried deep inside my purse and everyone would laugh and I'd say something like, too bad I can't glue my phone to the side of my head so I can keep track of it better, sort of like in the novel Feed, by M. T. Anderson, where people basically have their phones implanted in their brains.

(It's no joke, Mom, my son told me recently. That's totally the next step in phone technology.)

My son is also the one who told me that our dependence on our phones and on social media in general is similar to the addictive feeling we get from gambling.

I believe him. Each click on a website -- checking Likes on a post, searching for funny memes and videos -- gives us a little surge of endorphins, just enough to keep us clicking, and just enough of a charge to ignore the fact that most of what we're digesting is silly or stupid or in many cases toxic and evil. Side note: we are now, in this country, getting a real time civics lesson in how government propaganda works. 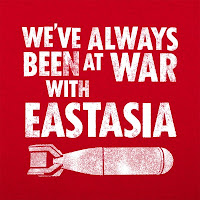 I don't want my phone attached to my brain.

I don't want it in my hand all of the time either. How did something that didn't even exist for me ten years ago become such an addiction?

I don't have to continue to consume media passively and uncritically either.

Anyway, this month, as an experiment, I'm setting aside my phone-- for everything except it's original use: talking on it. (and okay, texting/messaging, because it is the only way my kids communicate with me). I'm also limiting my time on social media.

If you need me, call me. I promise I will answer the phone.

If I can find it.

Email ThisBlogThis!Share to TwitterShare to FacebookShare to Pinterest
Labels: my phone. please. take my phone away from me. now.