___1. The year we filled the bathtub with water because you never knew if it would be the end of the world as we knew it when the clock struck midnight. It was a half-hearted tub-filling though. Last minute, right before the babysitter came over. We left her with instructions:

if the power shuts off, we'll make our way back home as soon as we can. Then, off we went to play board games at our friends' house, leaving the six year old and the two year old in the hands of a teenager and the possibility of a potential computer-glitched meltdown apocalypse. But at least we had some tub water?

___2. The year I was the babysitter, putzing around in some virtual stranger's house, eyeing their champagne, even though I had never tasted alcohol, but wondering if it would be okay to take a sip at midnight? while watching Dick Clark's Rockin' New Year's Eve party alone, some random kids asleep upstairs.

(Hint: I was twelve years old.)

___3. First year with my boyfriend (soon to be husband) and we strolled out of my apartment (he was still in school but staying over) and headed down the street to THE cool hangout at the time, a place called Overton Square, where we made our way through the growing mob of cool people and met up with friends, vowing to stand out there until the ball dropped,

but quit before midnight because some not-so-cool ding dongs in the crowd started throwing glass bottles in the air.

___4. The kids were all grown up and one had jetted off to London, but the rest of us were together, shaking up our annual New Year's multi-family house party by meeting somewhere in the middle, in this case, Asheville, North Carolina, a cabin in the woods, where we went hiking and nearly got blown off the top of a windy mountain, explored the funky art studios by the river and made our yearly music video.

Hint: This is happening right now :)

___5. It's a three-family, four-night slumber party at our house. Six adults, seven kids. Seemingly non-stop eating, drinking, game-playing, father-son-football, and a weepy night, all of us together, watching old videos of the past ten years of New Year's, the kids as toddlers, school age, and now on the verge of teenager-hood,

marveling at how long our families have been coming together and vowing to keep meeting up over the next ten years.

Spoiler alert: We did. 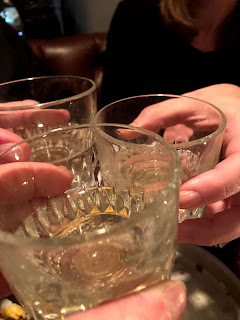