Today the library will close, just a precaution for the next three weeks. My afternoon shift is like the panic shopping at the supermarket yesterday with everyone clearing out the toilet paper, except this time with books and dvds. It's gratifying, and yet, worrisome, seeing the shelves emptying out.

I stand at the check-out desk with my hands up, continually hand sanitized, like a surgeon, and chat with the patrons. What will the kids do without school for three weeks? Will they call in the National Guard? This is a stupid overreaction. Can you recommend a good mystery series?

During a lull, I run around and check out books for myself. Gardening books mostly. And this weird-looking paperback romance that's been sitting on the new book shelf, untouched, for the last month.


My daughter messages me that she's a little panicky alone in London now that her grad program is going on-line. Her boyfriend, who's telecommuting to work in Bonn Germany, is trying to catch a train to see her.

Broadway shows and museums are cancelled in NYC. But my friend in North Carolina, who is a school vice principal, says it's business as usual in her town. Another friend goes on a cruise with her family because the prices are good right now.

It snowed today. My husband and I think about going to Lowes to buy yardwork stuff but decide not to. Why leave the house?

Her boyfriend made it there and she informs me that she heavily sanitized him. Assume you're both infected, I tell her, and stay away from other people!

They closed schools in North Carolina. My husband bakes a loaf of bread and we eat the entire thing.

Snow has melted and we work in the yard. My husband takes down the weirdo shed the previous owners built and I cut down all of the bamboo. (BAMBOO!! WHY DID THEY PLANT BAMBOO?!)

My husband bakes another loaf of bread.

Our daughter sends us daily dance videos of her and her boyfriend self-isolating. It's them, jumping up and down and saying what day it is of Self-Isolation. The Ohio governor closes all restaurants and bars in the state. People in Florida are snapping pictures of a crowded Disney World, the last night before it closes.

Two more cases in Ohio, both in Columbus. My husband is working from home and in tele-meetings all day. I am writing. Goal: finish the scene I've been fiddling around with for the past week.

Goal in the backyard: Move rocks out of the old koi pond. Talked to the guy next door over the fence. He is taking things in stride, going out (where? Everything is closed except for grocery stores). He fought in the Israeli army in the 1970s, he tells me. This pandemic is nothing.

The governor is talking about cancelling the primary tomorrow. My son and his girlfriend are locked down in the San Francisco area. How's that going? I ask him.

Meh, he says. Not too different. (He works from home anyway.)

I am writing 750 words today if it takes me all day damnit. The primary was cancelled and then it was back on and then it was cancelled again. I print out absentee ballot applications. Gyms and movie theaters are closed. Skype with our daughter and her boyfriend where they attempt to teach us a card game called Corona.

I make macaroni and cheese and move rocks around in the backyard. My son sends me an article about how one of the reasons this situation is so stressful is because we have no narrative structure for it. It's all still unfolding in real time and we can't make sense of it yet.

Ventured out to the grocery store and felt like I was in a Walking Dead episode. No music playing and eerily quiet. People shuffling along not talking to each other. A little girl coughing in aisle 12. What the hell? My husband whispers to me. Who brings a sick kid to the grocery store at a time like this? No toilet paper. No hand sanitizer. No pre-made-spaghetti sauce.

But you can buy wine.

Tele-meet with my writers' group and drink half a bottle of wine.

Move rocks in the backyard. Cut stray bamboo. Take a walk around the block with the dog and note the line of cars in the drive thru at the Wendy's and Starbucks down the street.

Write 750 more words on my book and realize what a glorious gift it is to be able to disappear into another world for a few hours each day.

Son sends me a photo of his girlfriend working in their home office in couples graduate housing at Stanford.

Daughter sends me a dance video. 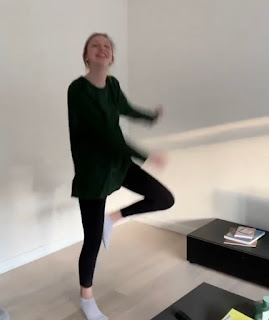