Pandemic shopping at the grocery store

The parking lot was full, and a woman walking out to her car with a cart told me I might want to take hers. There are no empty carts inside, she said, adding, Don't worry, it's freshly hand-sanitized!

I wiped down the handle anyway on my way in, noting what looked like over-abundant displays of chips and salsa in the entryway. I skipped those. I was hoping to find toilet paper. The night before, during what was the most idiotic presidential speech I have ever heard in my lifetime, my husband, who was on the phone with his office trying to figure out how to reroute all trade goods from Europe, was also online trying to find toilet paper on Amazon.

(Update: the president misspoke? misread his teleprompter? is a complete and total rambling lunatic? and didn't mean to say that all cargo would be halted from Europe. One crisis averted. But, there was still no toilet paper to be found on Amazon.)

The grocery store was bedlam. A combination of an old-style Soviet country during a food shortage and shopping for New Year's Eve, with check-out lines snaking into the aisles.

A few hours earlier the Ohio governor had closed all schools in the state for the next three weeks. We only have five confirmed cases of COVID 19 here, but we also have not been testing people until a few days ago.

But we are all apparently hunkering down for the long haul. Here, at the grocery store, onions and potatoes are mostly gone, but you can still buy pre-cut veggies and chicken taco kits. The jelly and peanut butter are picked over. Ditto bread and jars of spaghetti sauce. I took the last bag of long grain rice off the shelf. Gave up hope on there being any toilet paper, but came to the end of an aisle and saw a woman with packages in her cart.

They have toilet paper?

They do. Limit 3, she told me. But you better hurry! 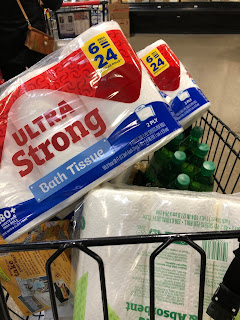 I booked it across the store and scored my three packages, then headed over to the cleaning supplies and the pharmacy for cold and flu meds, just in case, then joined one of the long lines snaking into the aisles. The man next to me had boxes of wine in his cart and I thought about leaving the line to grab some of that myself, but stayed put. This is like 9/11, someone said.

And I remembered those panicky days, people running out to fill their cars up with gas, how empty and quiet the skies were without any planes flying. There was an anthrax scare for a few months and my son's school banned envelopes. If you wanted to send in the Scholastic book order money, you needed to seal it in a plastic sandwich baggie. I did that for years, long after we were allowed to use envelopes again.

It's easy to panic. Easy to think a plastic baggie or toilet paper will keep you safe.

Yesterday afternoon at the library, it was quiet, except for one woman coughing at a computer. The toys and blocks have been removed from the kids' play area. But you can still check out books and movies. I wiped a sanitizing wipe along my desktop and rearranged the new books in the new books section.

A family burst through the doors. You're still open? the mom said breathlessly.