Impossible decisions in times of plague

A million years ago we were on a sixteen-hour car trip and our son was playing the video game Oregon Trail in the backseat on an old laptop. 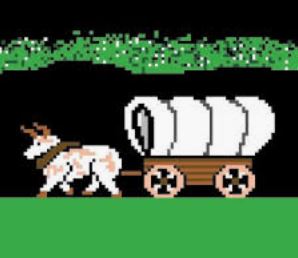 I didn't know what the game was. It was something his second grade class had been playing. He was quiet back there, but every once in a while he'd ask my husband and me a question. Should I ford the river or should we go around it? How many supplies should we buy? At one point he told us he had bought a 25 pound bag of cinnamon and my husband and I cracked up.

That’s enough cinnamon to last you for the rest your life, we said. A little while later my son piped up that my husband and I had both died of dysentery.

Twenty years later my son is hunkered down outside San Francisco with his girlfriend in an apartment that’s smaller than our living room. Our 22-year-old daughter, in London working on a masters degree, called us the other day in a panic. The UK, which is roughly a week behind where we are in Ohio, as far as taking Covid 19 seriously, had just announced that the country was about to lock down.

Should she come home? Or should she stay?

My husband and I brainstorm the options with her. And none of them seem good. Stay in London, a city of 9 million people on the verge of an exploding pandemic that will rival New York’s?

Try to leave now, possibly get stranded in a foreign airport, contract the illness? (This is assuming we can find a flight, and understanding that when she gets here, my husband and I won’t be able to hug her while she self-isolates in her bedroom for two weeks.)

We call our son. Maybe he can talk to her? He’s more logical than we are. Would he stay or go?

What are her supplies? he asks. We joke about 25 pound bags of cinnamon. But the truth is, she has supplies. For some reason she has a dog-food size bag of oatmeal. She has plenty of toilet paper.

I don’t know if she should get on a plane, my son says. He jokes about being stressed out going to Trader Joe's...

We all waffle back and forth for another day, realizing even as we waffle that we may be running out of time to make this decision.

Meanwhile I have visions of London as a dystopian hellscape, my daughter in her apartment sick with fever. I see a mass of bodies at an airport crammed together trying to get through customs.

I wake up in the middle of the night with a moment of clarity. She is not sick. She’s in an apartment, with her boyfriend. They are smart, cautious people. They have enough oatmeal to last many many weeks.

We talk to her the next day, running through every permutation of options again, and in the end, she decides to stay where she is.

These are the things I know for sure: There is a wave coming at us. It will get worse, before it gets better, but I have to believe that it will get better.

So here we are now. Our son in San Francisco. Our daughter in London. My husband and I in Ohio, all of us hunkering down. This is not a game, but like a game, we have to play it, remembering why we are playing.

Make it to the other side. Stay safe. Stay well.