In January I start planning a trip to London to visit my daughter who is living and going to school there for a year. I have never been to London and I want to do it right. See everything London-ish. Take in a High Tea. Look at the Crown Jewels. Whatever else is in London.

I want to see the White Cliffs of Dover, I tell my daughter during one of our daily conversations.

What are the white cliffs of Dover? she says.

From the Matthew Arnold poem "Dover Beach," I explain, where the ignorant armies clashed by night and the lovers swore to be truthful to each other. And then some other writer made a satire version of the poem called "Dover Bitch." It's really funny. You should look it up.

Okay, she says. Where are the white cliffs of Dover?

I don't know, I say. Dover? I pull up a map online and Dover seems kind of close-ish to London. But I'm not sure of the map scale. It looks like driving from Columbus to Cincinnati, which should be doable.

Ooh, I say, noticing other familiar literary-sounding places on the map. I want to see the moors where the people in Wuthering Heights haunted each other. And Bath, where the Jane Austen people took vacations. And Stonehenge! Can we go to Stonehenge?

My daughter laughs and reminds me that there's a ton of things to do in London. Hyde Park is right across the street from her apartment and where she goes to school is next door to the British Museum. But keep looking for other things that interest you too, she says.


I order books from my library right away. The latest Rick Steves' England 2020 and London 2020 because I love Rick Steves. When I went to Prague with my friend Lisa, I read her entire Rick Steves' Prague and the Czech Republic to see what kinds of things Lisa had planned for us.

Side note, I never plan trips and I am happy to let other people take the lead. My husband is the total trip-planner in our family, and he has gotten it down to an art, complete with excel spreadsheets of the daily itinerary, sights to see, hotels, gas mileage.

But back to Rick Steves and why I love him, because one Monday morning, when Lisa and I were on our way to visit a castle, after she had negotiated the complicated train ticket transactions (based on Rick Steves' advice) and gotten us off one train and onto another much smaller one, (also with Rick's help) I read the chapter on the castle and noticed the disclaimer that the place was closed on Mondays.

But no matter. Rick Steves helped us out there too, with a description of the only cafe in town and the hiking trails in the area. He really does think of everything.

Another reason why I love him is because I heard him speak when he came to Columbus last year. My library and all of the other libraries in the area organized a visit and I dragged my husband downtown and we got to hear about Rick's various trips around the world and how you should always step off the beaten tourist track and mingle with the locals, and when you do that, you'll see what's the same about people and not buy into the crap the politicians want you to believe about Others. Also, always try the local food.

While I was waiting for his books, I checked out the audio book of Bill Bryson's Notes from a Small Island, which is about his life as an American living in and traveling around England. I listened to the book while I painted the master bedroom in our new-old house, getting excited all over again about going to places like Dover Beach and then crossing Dover Beach off the list because Bill Bryson said it wasn't that great of a place to visit. But that was in the 1970s when he visited, so who knows. I would need to check with Rick Steves.

But by the time his books did come in, there were rumblings about a virus and people started asking me if I was still going on my trip, and I assured them I was, and I would bring a lot of hand-sanitizer and cleaning wipes with me. And then I'd make a joke about how nothing was going to keep me from seeing my daughter, and also, haha, I want to stay in the apartment my husband and I have in London.

About that apartment: when our daughter got into her grad program, we told her we'd help with the living expenses and that turned into renting an apartment for a year. I got such a kick out of telling people I had an apartment in London and if they were planning a visit, they could stay there, in our apartment.

Meanwhile my daughter got us tickets to see Romeo and Juliet at the Globe Theater and planned our two-day trip to Bath, and I was trying to find hand sanitizer and not finding any in the stores and researching how to make my own...

The flight, after quite a few changes, left early this morning. Without me on it.

While I chat with my daughter online, she takes a picture of her lunch set out on the balcony of (our!?!?) apartment. It's a lovely warm day in London and she's allowed one walk in the park across the street.

She'll give me a call later when she takes it. 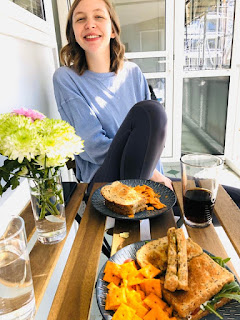