Up early dealing with the airline. In an alternate timeline, I'm jetting off to London tomorrow and It's time to check in!! Meanwhile, in this crappy timeline, I'm trying to get an e-voucher for another flight. Whenever that will be.

But woo hoo, I finished writing my book today. I have this thought that I'll write in a virus subplot, but then decide that I can’t put that in the book. This is supposed to be a rom com and in a rom com there will not be a plague.

We watch a movie called Contagion about a virus and we critique what they get wrong. People looting stores on like, day four, but everyone's wearing an N95 mask. Yeah, right. 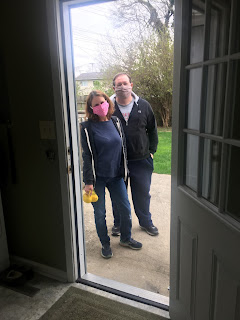 But speaking of masks, my mother has sewn some for my husband and me. We visit her, keeping the prescribed six feet away, and try not to look like bank robbers.

Our family does a cross-time-zone group video message chat. It's brunch in San Francisco with our son and his girlfriend, lunch for my husband and me in Ohio, and dinner time in London with our daughter and boyfriend. We swap recipes and talk about how we're entertaining ourselves and this is the first time I've felt semi normal in weeks.

I go to the grocery store at 8 am wearing my mom-made mask and it's not horrible. The store has arrows on the aisles now to keep things flowing in the same direction. I still always feel like crying when I pull into the parking lot. When you wear a mask, people can’t tell if you’re smiling. My nose itches and I have to do a zen meditation to keep from scratching it. Worse, the hot flash I have in the toilet paper aisle.

Unpacking the groceries, bleach on hand, I have a moment of panic: Will the country collapse? Will we get sick? Will we lose our jobs? What will the world look like in one month, if now, one month in, it already looks so different?

But then I talk myself down from the ledge. I planted lettuce seeds over the weekend. In one month, I know this:

we will have lettuce.

Trump says he has total authority over the states. There are outbreaks in nursing homes and prisons. In Ohio protesters want the governor to reopen the state because they don't understand viruses. Or math. Or reality.

I started listening to the audio book The Library Book by Susan Orlean about the fire that destroyed the Los Angeles library in 1986. It’s fascinating and sad. Half a million books destroyed. It happened the same day that news of Chernobyl broke, which is why most people never heard about it. I’m afraid I'm going to lose my job.

A story in the paper about a man with Down Syndrome who died on his birthday. And then his mother died. They were each other’s life, the article says. Trump wants his name on the stimulus checks people are supposed to receive this week. They’re delaying sending the checks so they can add his name to the memo line.

I meet up with my best friend to take a socially distant walk. I worry that we won't be able to hear each other talk if we're wearing masks. But we can.

One of my FB friends is seriously talking about taking a cruise because the prices are so low. More people are protesting for their right to go back to work and die I guess. It's suddenly cold again but everyone in my neighborhood is out walking.

My husband and I order pizza and hammer it down while watching the daily briefing with the governor and Dr. Amy Acton. You may be experiencing the five stages of death and dying, she says. It's okay to feel denial, anger, grief.

She holds up a mask.