In the alternate timeline to the one we are now living, my husband and I would be going to the car show downtown tonight. It's my annual Christmas present to him because he loves cars. I hate cars but the car show people do this silly scavenger hunt thing, and weirdly, I get into it. Anyway, the car show's cancelled.

I take the dog for multiple walks, crossing the street to keep my 6-feet of social distance from the hundreds of other people out walking in our neighborhood. Everything is closed except grocery stores and pharmacies but our governor tells us it's okay to go outside, so everyone and their mother is outside.

Speaking of my mother, I drive out to see her. We're doing a puzzle exchange and I've brought her some groceries, a few rolls of precious toilet paper. It's raining and she sits at her kitchen table and I talk to her from the doorway.

At night my husband and I order dinner from a nearby restaurant, a fried mushroom appetizer and fish tacos and wine. It almost feels like a normal Friday night. 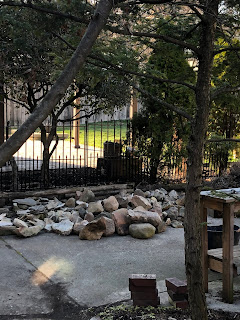 I write two pages in my book and then go outside and move rocks around in the backyard. The big on-going project in our new-old house has been removing the koi pond. This seemed like an easier project in theory when I started on it last fall.

But somehow we end up with more rocks than we started with?

The virus is exploding in New York City. The governor of Florida is blaming New York for his state's cases. Meanwhile, he still won't close the beaches in Florida. Has this man not seen the movie Jaws? Meanwhile, trump is mad at the governor of Michigan because she won't be nice to him.

My husband and I have a virtual cocktail party with our friends in North Carolina. We sit out on the porch until it gets dark and talk about our far-flung kids, everyone safe and well for now.

I paint the drawer handles on a dresser and think about designs for the herb garden I'm going to put where the koi pond was. Trump thinks we should open the country by Easter. The Lt. Governor of Texas says grandparents should sacrifice themselves for the good of the economy.

Thirty days hath September,
April, June, and November,
All the rest have thirty-one
Except March which has 8000

I do a morning writers meditation with Laurie Calkhoven through the Highlights Foundation and feel amazing for about an hour. Trump says okay, maybe he won't open the country by Easter. He brags that there could have been a million deaths, but now there's only going to be one hundred or two hundred thousand.

I dig through my daughter's old beanie babies in the basement and find three bears to put in our window for the bored little kids in our neighborhood who are going on bear hunts.

I am addicted to watching Dr. Amy Acton, the Ohio Director of Health give her address each afternoon. She has such a calm, sweet voice even as she is giving us the bad news, that in two or three weeks, Ohio will reach our peak and 10,000 people each day will be diagnosed. She praises us for staying in and helping to push the peak out so we can get our hospitals ready for the influx. What you're doing is saving lives, she says.

I write 750 words and have another Zoom meeting with my writers group. I wear a mask and gloves to the grocery store and feel like I am living in a dystopian novel.

My husband said something to me about my anxiety as if it is strange. But how can you not be anxious right now? I ask him. People are dying alone in hospital hallways. At the same time, the mail gets delivered. We can order pizza online. I take walks in the neighborhood and people are working on their porches or riding bikes, doing lawn work. There’s always a line of cars at the Starbucks down the street. Sometimes I feel like I’m on the verge of tears.

A little girl from the class I taught at Thurber House a million years ago in February, emailed me a 50 page story she's been writing. I read it in the morning instead of reading the news and marvel at how good the writing is. Scene development, dialogue, a large cast of characters, an authorial voice. This kid is ten years old!

A writer I know who was sick in the hospital in NYC was released today. I get in a facebook argument online with a friend of a friend who insists this is just like the flu. While I'm having this argument, trump says in his daily address that he's number one on facebook.

The library where I work is closed until May 4. I have a panicky feeling thinking about growing up in a crazy household and how familiar this present anxiety feels—not knowing what’s going to happen next and feeling on guard and vigilant and just a steady level of stress with no control over anything going on. Over the past thirty years I worked to teach myself to be more trusting and feel safer. And now, here I am back to my original self, like everything in between wasn’t the real thing after all,

I refuse to read the news.

I write all day. There's a scene in my book where everyone's gathered together at a restaurant and clearly not social distancing and the whole thing is making me nervous for them.

Meanwhile in the backyard, now that the koi pond's filled in, I decide to tackle the overgrown chunk of out-of-control ornamental grass. A few weeks ago my husband sawed it down to the roots and we filled up 15 yard bags of grass. Today, I'm digging up the roots, which involves jumping up and down on a shovel. It's a good workout. 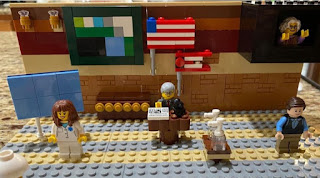 Kids in Ohio send videos of themselves dressed up like Dr. Amy Acton. A little girl builds a scene out of Legos of the daily Ohio press briefing.

My husband is growing a beard.

My artist friend Jan Benham sends me a coloring page of a bouquet of flowers and I color it in. 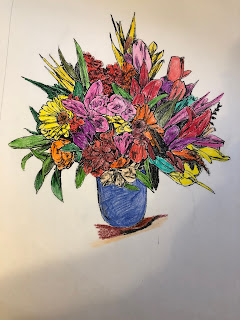