I am obsessed with the plants in my yard

The world feels like it's on fire and all I want to do is draw a map of my yard. Label the plants and flowers.

But this is harder than I thought. Weeks later and I am stuck, only the bare bones of the map filled in. The problem is I don't know the plant names. Some, okay. I do know by sight. The black-eyed susans, for example, which seem to be growing in clumps all over the place. Also, coneflowers. The orange lilies. Ferns and hostas.

I never realized how hard it was to identify plants. And why is it so important to me? I could draw my map without names. The Purple Thingys. The Green Stalky Ones with No Flowers Yet.

Every morning after I read the news and despair over the state of humanity, I go outside and see how all of them are doing. Who has flowers today. Who has bugs eating them. I want to take care of these things better, but for that, I need to know their names.

My plant snap app is no help at all, and here, I'd been counting on it as solution to all of my plant-identifying questions. Just take a pic of the plant and within seconds it's supposed to tell you what it is.

Orchid, it said, about my mystery purple thingy.

Even I know that's wrong. I search for clues online. I snoop around in the neighborhood on my walks. Some gardeners around here have helpful sign labels by their plants. But I can't find a match. It hits me suddenly that there are books out there on plant identification.
I order some from my library and pick them up in the curbside delivery. I can't find the Purple Thingy, but I learn that the orange lilies are pointless.

Each bloom lasts for only one day and then it shrivels up. Worse, bees and butterflies don't want the flowers. Bees do like the purple mystery plant though. Turns out it's called Loosetrife. The answer didn't come from an app or a book or online, but from my next door neighbor, who tells me it's invasive.

But there are more mysteries. 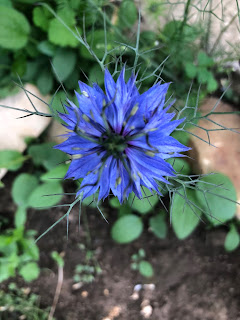 After much research in my books on perennials, I realize it's not a perennial! It's an annual called Love in the Mist.

And this one is not a perennial either. It's a bulb. Crocosmia. 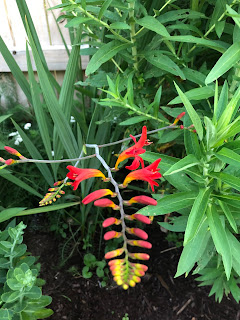 Who names these flowers? Should I thin them? Replant them? Water, and how much? Should I tear out the pointless orange lilies and replace them with native plants that the bees like? I still don't know what the Green Stalky thing is. There's a weird beetle-y looking bug on it chewing on the leaves and turning them brown, which has me worried.
But I am worried about everything. The virus. Racism and police brutality. Schools going back in session and putting students and teachers in danger. The heat rising every day and didn't I read that the Arctic is melting--
I can't look at the news anymore. And still, my map's unfinished even as the flowers, named and unnamed are blooming and/or shriveling.
Okay, I was going to end this here,
but I have to tell you a story first. A few weeks ago. I got into a conversation, socially distant and masked, at the farmer's market with a farmer who was advertising that he had praying mantis egg sacs for sale. This was fascinating to me because why would someone want to buy praying mantis egg sacs? I mean, gulp. Are you supposed to eat them?
But no. The farmer told me that the egg sac, which looks like a thumb-sized version of a bee hive and comes attached to a stick, is something you poke into your garden for insect control on your plants. I bought three, because I was immediately thinking of where I could poke these things. Near my zucchini plants and by the peppers of course. But also, by the Green Stalky plant, which was looking more and more insect-eaten.
Another side note: it was funny getting these little egg sacs home. Supposedly, each one contains over 100 praying mantises and the farmer said, jokingly, I hoped, that he was sure I'd make it home before they hatched. I had visions of them hatching in the car, but luckily they did not. I poked them in the garden, and then I waited.
Not sure, for what.
But look.
This morning, just now as I went out for my daily petting of my plants, both named and unnamed, I found my Green Stalky one looking lush and beautiful, and on one leaf,
this 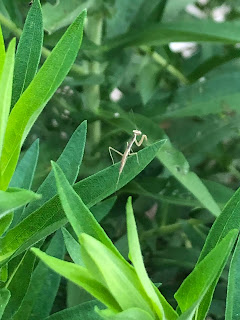