Okay, I am lying. It is a post about covid. How can it not be, when it's pretty much all I think about-- when I'm not reading about it or talking about it.

My daughter has had enough. On the chalkboard in the kitchen where we keep our family To-Do list (paint the porch, for example, and make a Tic Toc video) and the running Bananagram family game night total (I am winning, comfortably, thank you very much), our daughter has written Days w/o Talking Rona.

The tally for that is always Zero.

I fully admit to this. Back in March I started writing the cumulative case total every day. And then, the death toll in my planner, the same way I used to write my daily writing word count. It is sobering to look back at the first day, March 13, with five cases in Ohio and zero deaths, to July 13-- 62,913 cases and 2807 deaths. These are not numbers. I know some of these people.

And everyday I read the latest updates in the newspaper, follow the conversation of epidemiologists on Twitter, what they know about the virus, and what they still don't know, all of this unfolding in real time, which makes the reaction of some politicians and weirdo anti-maskers/science deniers baffling to me. Why don't they get how dangerous this is? Why would they think, for example, that it would be okay to send kids back to school?

But then, I do understand. Because it's scary, all of the Unknown, the world we thought we knew and understood shifting out from under us, the world where you could dash out to the store without donning a mask, where you could meet up with a friend for lunch inside a packed restaurant, go to a concert, travel on a plane--

So here is a story that has nothing to do with it:

Last year when we first moved into our house, I took long meandery walks with the dog, both of us nosing around the new neighborhood, admiring (or in the case of the dog, peeing on) the lovely unfamiliar front yards. One place we both liked to stop had these large, absurd-looking flowers, huge balls of blooms that seemed like they were too large to stay on their stalks upright without tipping themselves over.

But they didn't tip over and I was obsessed by the physics of them, the bees always buzzing around nearby. So one day when the owner of the flowers came out to water them, I struck up a conversation with her. She told me they're called Cleome and then she did one of the nicest things anyone's ever done for me: she dropped off some seeds.

This year in April at the height of our lockdown I planted the seeds, first in small pots, and then transplanted the seedlings in several places around our yard, and then thinned them, which broke my heart, but you have to do it, and then stood back and watched them grow.

This week they are just beginning to bloom those absurd blooms. My plants are smaller than the ones up the street, but I have high hopes that they will grow bigger. Now, as I sit outside on our front porch writing, I can see the patch of cleome I planted and a woman walking by with her dog, stopping to take a look.

She moved past before I could offer her seeds, but next time, I promise.

And just for today, a promise to my daughter and long suffering husband: 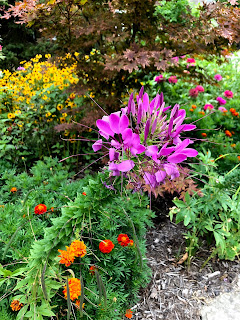