Existential Crisis with a Serving of Oreo Cookie Brownies

Typically, I am not a person who buys Oreos.

When the kids were little, I wouldn't let them eat them. Something about the partially hydrogenated fat and/or the high fructose corn syrup. I don't even remember now but it was important to me at the time, so in our home we only served the supposedly more nutritious Paul Newman brand called Newmanos. My kids, I figured, would never know the difference.

(Side note: when my son was in fourth or fifth grade, he came home all excited from a birthday party and asked me if I'd ever heard of this much better tasting Newmano cookie called an Oreo.)

Anyway, the other day I bought a package of Oreos so my daughter and I could make a recipe with some friends. We've been doing this thing where we alternate choosing a recipe and do a facetime-bake together. This week our kitchen smelled like a candy store and I ate my fill of Oreos--partially hydrogenated fat and/or high fructose corn syrup be damned.

I mean, really. Who cares. 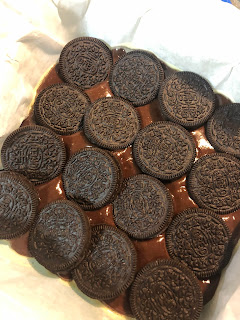 We are moving through uncharted, inevitably rising, waters.
My son, who still probably gorges on Oreos because of the deprivation of his childhood, shared a link to an article with me back in March, the gist of which is about how we've lost the narrative thread and without a narrative thread, we can't make sense of what the hell is happening. Remember the morning of 9/11 when the planes crashed into the towers and the newscasters could only express horror in real time?

That's like now, except the Global-Pandemic/Shit-show-Presidency/Long-Overdue-Collapse-of-White-Supremacy/Looming-Climate-Change-Disaster is still unfolding. Basically, the towers have been falling in slow motion for eight months and there is no end in sight.

In the meantime I signed up our family for a Cooking-with-a-Chef fundraiser program run by a local urban farm. I didn't even know this place existed, but it's an actual working farm smack in the middle of an economically depressed area near downtown Columbus in what's known as a Food Desert. (My daughter corrects me to say that we should actually refer to these areas where there are no supermarkets/places to buy affordable, nutritious food as: Food Apartheids, because that implies a purposeful, systematic problem and not something that just kinda happened, like a desert.)

Franklinton Farms has been operating for thirteen years. They distribute food to families in the community and help people start their own gardens and a do host of other cool things, and last night they had a virtual program to raise money that featured Chef Del Sroufe (best-selling author of Forks over Knives: The Cookbook).

We were not using Oreos (or Newmanos) as an ingredient. My daughter and I went downtown to pick up the bags of farm-grown produce and then we had a blast putting together the meal with the chef and all of the other people who signed up for the fundraiser.

For the record we were making Black Bean Sweet Potato Enchiladas with Sweet Potato Cashew Cream and a side salad of Wilted Kale. Before the program started my daughter and I prepped all of the ingredients and were feeling very proud of ourselves as the chef began his cooking lesson by slowly peeling a sweet potato. Not that this was a competition, but we were so much further ahead of the people who were just unpacking their produce bags.

But then suddenly we were rushing around smoking our spices and blender-ing our cashew mixture sauce and lemon zesting our kale and cracking up at the comments, that one poor soul saying, Wait, I'm still peeling my potato, what's this about spices? and someone else, Help! I don't have a third pan!

The dinner was good. 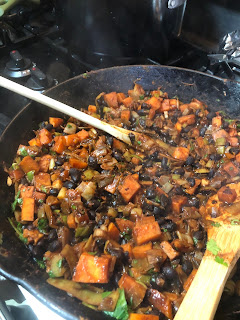 Maybe not oreo cookie brownie good, but filling and warm and it was nice to sit down and eat it together.

We can’t see the way ahead. We have no narrative except for what we do now, this moment, the Oreos we line up in rows on our brownies and the lemon zest we toss on our wilting kale. The people we love around our table

or far away and smiling at us through our glowing screens.