Five Questions for Natalie D. Richards (author of Five Total Strangers) Plus: a chance to win a signed copy!

Did you ever have a nightmare where you're trapped somewhere and everyone around you is a stranger? Maybe you're in a car. And you can't find your phone or your wallet. You need to get home because someone you love is in danger. But there's a blizzard and the cars ahead of you are spinning out on the interstate.

Oh, and someone in the car might be a psychopath.

This is the world we live in now. That, or it's a Natalie D. Richards' book. Not bragging (okay, I am totally bragging) but Natalie is my critique partner, so I got to see her latest book (out now! Buy it here! Or check it out from your local library! Or stay tuned for a chance to win a free copy!) as it progressed from kernel of an idea to hot-off-the-press lovely glossy book. 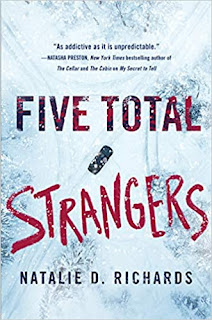 It's not easy to write a book, even when you're a master of suspense, like Natalie is, with six previous published books under your belt. I sat down (virtually) with her the other day to ask her to walk me through the sometimes bumpy ride of writing Five Total Strangers.

Me: Take us back to the beginning. What was the initial idea?

Natalie: Two ideas, actually. I'd been thinking about times I've been on bad roads, driving in snow or ice, that feeling of suffocation being trapped in a car and watching cars wrecking around you and worrying it's going to happen to you too. And somehow that idea got tangled up with another fear I have, that maybe the people I know aren't who I think they are.

Me: It's so interesting to me how two unrelated ideas can come together like that. You and I talk about this a lot, brainstorming stories and trying to figure out which ones have the most potential. I know you discard more ideas than you keep, so what makes a keeper? What turns a potentially cool idea into a book you want to write?

Natalie: One thing I always do before I start a project is write out what I think would appear on the back of the book. How can I draw readers in? What would make me buy this book? I write two or three paragraphs and it quickly becomes clear which ideas have merit and which ones just aren't strong enough. I don't waste my time with those, that's for sure.

Me: Right. Because you have so little time! You're writing under deadline. You're juggling your full-time job and three kids at home. I still don't understand how you manage to squeeze in any writing. What's your time-management secret?

Natalie: Late nights and lots of coffee! But seriously, I spend a lot of my writing time not actually writing but working through the story in my mind. With Five Total Strangers I had the idea that there'd be a snowstorm and I was thinking about my main character, Mira, and why she would be trapped in that snowstorm. Where was she going? How'd she end up in this car with people she didn't know? Parts of the story click into place-- things like character motivation and ways that I can dial up the tension--before I even write the first sentence.

Me: I remember reading the first draft of the first chapter and immediately being pulled into the story. It's Mira on a plane and there's this awful, extreme turbulence. It's all so unsettling--the warnings from the captain and the cries from other passengers--and we haven't even landed and begun the actual horrifying journey yet. But there are clues in that scene too-- to the other characters that will eventually be in the car with Mira, to Mira's real fears and reason for needing to get home so badly. How much work goes into setting up a book like this? Are there a lot of false starts and rewrites?

Natalie: It's weird that you mention this because that first draft chapter is very very close to the final published version. This is not typical for me. I usually have to rewrite and rewrite the opening scene. But this one was comparatively easy. On the other hand, all of the rest of process was not so easy.

I reworked whole chunks of the book, playing with timelines and points-of-view, and I really grappled with those four other characters in the car--what were each of their motivations for being there? What secrets did they keep? Each character felt like a separate book in my head.

And the setting itself was a challenge. These same five people are in a car for most of the book. There's only so much space to work with, only so much physicality. There can't be running or chasing so I had to find other ways to add suspense. But this is ultimately what makes it scary.

They're trapped and the nightmare is all around them and coming closer and there's nothing they can do. They're totally powerless. It's basically Corona in a car.

Me: Oh my God, that's true. And you wrote this before the global pandemic! I think you were finishing up the copyedits right before the lockdown in our state. When I read that final draft, I was sucked right back in, rooting for Mira, worrying about her all over again--even though I knew how it would all turn out. This is a scary book, but it's ultimately the good kind of scary because eventually the crazy nightmare ride comes to an end. (Sorry for the spoiler!)

Which brings me to my final question: Can you write our world now, Natalie?

Natalie: I would need too much coffee for that.

Me: Ah well, I thought I'd ask. In the meantime, at least we have fun scary books to escape into whenever reality gets a little too real. Okay, I said I'd only ask you five questions, but here's a bonus: Because of the pandemic, you're not able to do your planned book tour, school and bookstore visits and festival book signings. Where can we find you virtually?

Me: Thanks, Natalie! And thank you for offering to sign a copy of Five Total Strangers to give away to one of my lovely On The Verge readers.