The Never-ending newsiness of the news

I shut it off for a while today. Put my phone down. Went out into the dying garden. Pulled weeds and yanked up old puckery beets and cut some not-yet-dried-up flowers. But now I don't know what to do with the rest of the dying stuff. The blackening Black-eyed-Susans and the crusty coneflowers and sedum and the purply thing that I finally figured out is called aster.

There's a big push in my online neighborhood gardening group to leave plants where they are in the fall instead of cutting everything back. Wait until spring, is the new best practice, at least in my hippie dippie neighborhood. Something about the birds needing seeds to feed on in winter and decomposing leaves being good for the soil. Also, don't even think about raking the leaves in your yard.

Although, there is some dispute about that.

I'll rake if I want to! someone in the group comments.

Someone else jumps in to admonish them: Fine, go ahead and destroy the monarch butterfly's natural habitat!

Over in another online group people are arguing about Halloween (give out candy? during a Pandemic? Are you nuts?) about masks, football, hybrid school models, travel, holiday get-togethers-- But that's nothing compared to the heat of the political arguments.

I read a book a few years ago about a boy who could hear what everyone in his town was thinking, including his dog. All day, every day, he couldn't turn it off, the endless overlapping stream of interior monologues--hopes fears dreams hatreds--

It's brilliant how the author shows this on the page 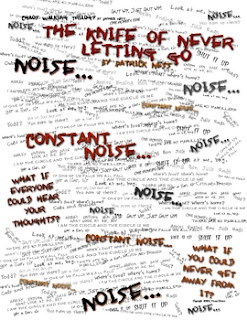 The book is called The Knife of Letting Go and the author Patrick Ness said in an interview that he was inspired by the internet.

It feels like that in my head sometimes. Clatter. Shouting. On particularly bad days, it's my own voice arguing with people I don't know, my mind zinging with outrage about whatever the latest thing is that is outraging. Which is to say, Everything.

I want to turn it off and just Not Know what's going on for a month, a week, a day, an hour. But this feels like a sisyphean task. I mean, isn't it in our DNA to seek out information? Look at those people in the black and white photos, gathered around their radios so they could hear about the war, the impending hurricane, the Hindenburg bursting into flames.

Of course those people's radios didn't ping them with continual news alerts.

I don't remember what happens in the book. I think the boy meets a girl whose thoughts he can't hear. Just being around her in this new kind of silence, not knowing what she's thinking, is blissful.

I crave that kind of quiet.

I finish up in the garden without looking at my phone once. I leave the dying plants where they are. I actually kind of love it. 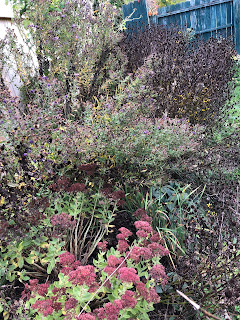