This has been a strange year of reading, many of the books tied up with what was going on in the world--with the pandemic and marches for racial justice--a year of reading books to make sense of things,

and books to try to escape it all.

Audio books that I listened to while painting rooms in our new-old house and/or remaking the entire yard, which will forever now be associated with those projects, as well as the books I read when I was resting between projects and parked out on our newly refurbished front porch or at the cabin we went to after the lockdown lifted.

A lot of these books are a blur now.

For example, I read three 700+ page books about the End of the World and I'm sure these books were good, but I can't tell you a thing about them except they were about the End of the World. Side note: I do think it's weird that I would've wanted to read books about the end of the world when it felt, and still sorta feels like we're living in very precarious times, but all I can say is there's hope in reading about the end of the world, because in the books at least, there are always a few decent people left to tell the story.

(For the record, the books were: Wanderers by Chuck Wendig, The Passage by Justin Cronin, and Under the Dome by Stephen King)

Some of the books that were not a blur and which I highly recommend: 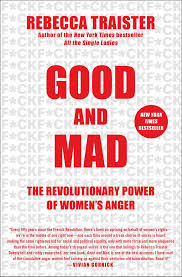 Good and Mad: The Revolutionary Power of Women's Anger by Rebecca Traister, which made me good and mad and also made me realize that I, who always thought of myself as a feminist, knew very little about the women's movement in America-- who led it, who gets credit for it (nearly always white women) and who doesn't (nearly always Black women) and why it was (and still is) so necessary,

which led me to discover:

Women, Race and Class by Angela V. Davis, an illuminating and upsetting collection of essays written in the 1970's about women, race, and class--illuminating, because these essays are brilliant and thought-provoking; and upsetting, because they could've been written today, as all of the issues touched upon are still with us and maddeningly so.

The Library Book by Susan Orlean. Fascinating and absorbing true story about the fire that destroyed the Los Angeles Public Library in 1986, but also about the history of public libraries, about books and community and rebuilding. (This book kept me going when I was newly furloughed from my job at the library and spending the excruciatingly endless and depressing days scraping the paint off the garage.)

Sing, Unburied, Sing by Jesmyn Ward. Some books plunge you into a world so fully and completely that the actual world disappears and you find yourself no longer swinging on a porch swing but barreling down a highway in Mississippi in the backseat of a car with a ghost on the way to a prison and it's sweltering hot and sad and scary but also, ultimately, hopeful and redemptive. 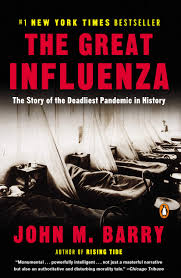 The Great Influenza by John Barry. Everything you want to know about the global pandemic in 1918--how it started, how it spread, how the medical community at the time tried to combat it and how many of the politicians screwed everything up and made it worse.

Fun/sad fact: there were infantile selfish anti-maskers back in 1918 too.

Desert Notebooks: A Road Map for the End of the World by Ben Ehrenreich. I loved this book and even though it is about the various ways that civilizations topple and the lone voices left behind who are often extinguished and forgotten, it will always make me feel comforted and less alone.

We Were Eight Years in Power: An American Tragedy by TaNehisi Coates. I picked this one up because I thought, (erroneously), that because it was about the Obama presidency, it would be hopeful and give me a nice dose of nostalgia for better days... and it was about the Obama presidency, but it was much more complicated than that. I promise if you approach this book with an open mind, you will never look at America the same way again-- not in a bad way, necessarily, but much more honestly and clear-eyed, and yes, possibly, with hope.

Nothing to See Here by Kevin Wilson. I listened to this as an audio and the voice, which is deadpan and soft and Southern, pulled me in and under its spell from the very first page. The premise: a woman is asked by an old friend to babysit two children. The twist: the two children occasionally burst into flames.

Okay, I know this is weird. But trust me: check the audio book out of your library, now.

A Little Life by Hanya Yanagihara. This book is the very opposite of little, clocking in at over 700 pages, detailed and meticulous and expansive, covering a thirty year period in the lives of four friends. It's been on my reading list for several years, mostly out of curiosity (A voracious reader friend of mine called it the saddest book she has ever read. Another told me that reading it was like taking a long journey.) And oh man, what a journey it is.

This is the story of a broken man, the victim of horrific child abuse, who doesn't believe he is worthy of love, but over that thirty year period, his circle of friends, his people, continually works to prove him wrong.

There's darkness here, and cruelty, hatred and evil. But there is so much love at the core. And a good reminder at the end of this very strange, and in many ways, lost year, what is most important in all of our little lives. 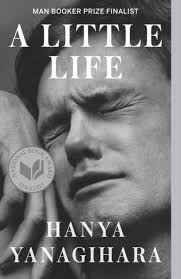