Interview with Shannon Hitchcock and Naheed Senzai, Authors of Flying over Water

My writer friend Shannon Hitchcock has a new book out and I'm so excited for her. I've been a fan of Shannon's work since I read her moving and absorbing novel The Ballad of Jesse Pearl several years ago. Since then Shannon's written two additional middle grade books, a picture book, and now has a contemporary and very timely novel out, co-written with author Naheed Senzai.

Flying over Water pulled me in from the very first page, as we meet Noura, a Syrian refugee who's moving to Tampa with her family during the very week that the Muslim ban is set to go into effect in the US. Later, we hear from Jordyn, an American girl whose family is helping Noura and her family settle into the community. The book alternates between the two girls, both of whom have secret fears and both grappling with issues many middle schoolers face-- friendship, competition, and fitting in.

Today, I am thrilled to sit down with both Shannon and Naheed for a behind-the-scenes look at how the book came to be. 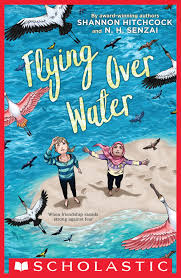 Jody: Where did you get the idea for the book?

Shannon: I got the initial inspiration for Flying over Water when a friend’s daughter converted to Islam. I started researching the religion, though I wasn’t exactly sure where the journey would take me. Around that same time, I saw a photograph in my minister’s office of a Syrian woman and her young son. They held a sign that said We Are From Syria—Can You Help Us? I started writing a manuscript about a young girl whose church is helping a Syrian refugee family. I wrote an entire first draft from the Christian girl’s point of view, but then I started reading online conversations about #ownvoices--

Shannon: Right. And thinking about that made me realize the manuscript would be more interesting if the Muslim character could speak for herself rather than her story being filtered through the lens of the Christian girl. I decided to seek a co-author, and after reading Escape from Aleppo by Naheed Senzai, asked my agent to reach out to hers. 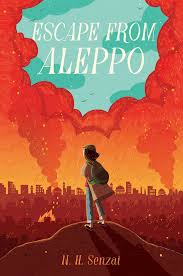 Naheed: And I was intrigued by the idea. I read the manuscript and immediately connected with the story of a Syrian girl, Noura, arriving to the United States as a refugee, befriended by an American girl, Jordyn. My previous book, Escape from Aleppo, was about a family fleeing the Syrian war and ending up in a Turkish refugee camp. Noura’s story provided an opportunity to explore what would happen to a such family if they were granted asylum in the United States.

At that point Shannon and I had a long phone conversation. We got to know each other and discussed how to co-author an engaging and interesting story that incorporated both our ideas. Once the groundwork was laid, we got busy writing Flying over Water.

Jody: I'm wondering how co-authoring works exactly. Did you write your character's scenes separately and pass back and forth or was there more collaboration involved?

Naheed: A bit of both. We decided to write in alternating chapters, beginning with Noura arriving in Tampa on the day of President Trump’s Muslim ban. We brainstormed and created a timeline of the story then plotted out the manuscript using Google docs. Once we agreed on plot, we wrote our respective chapters and passed them back and forth via email. One advantage to having a co-author is having a built-in critique partner. We also had weekly telephone calls.

Jody: And this worked throughout the revision process too?

Naheed: It did. Revision actually was pretty simple. We talked out the feedback we'd received to make sure we were on the same page, and then we each made the changes that applied to the chapters we had written.

Jody: You mentioned Trump's Muslim ban... the book also delves into anti-immigrant sentiment in this country, using examples of real-life hate crimes from the news. What are your thoughts on writing a story set in a particular, very recent and fraught moment in history?

Shannon: Both of us avidly follow politics so writing about the current political climate was a natural fit.

Naheed: And I’ve been lucky to travel and live around the world, particularly the Middle East. Also, my husband is a professor of Middle East politics so we have lively discussions on the region, its legacy of colonialism, wars, religions, people and of course its wonderful food. A core element of Flying over Water is to highlight how young people can become positive agents of change by engaging in civic and political action.

Jody: This is something I really loved about the book--how these middle school aged kids are affected by world events and how they respond, especially considering how different Noura and Jordyn are on the surface.

Naheed: On the surface, yes. They come from very different backgrounds, but they find out they have a lot in common. When faced with challenges such as xenophobia and intolerance, they band together with other students to fight for their rights as afforded by the constitution and its amendments.

Jody: This is another aspect I liked about the book, how you've woven in elements of history and civics. I used to teach middle school students and I can see this story being discussed in classrooms. Have you gotten any responses yet from teachers?

Shannon: Since our book was just published on October 20th, we're still getting the word out. We had our first joint virtual school visit on November 19th, and Scholastic videotaped us for The Nerdy Book Club Roundtable that was part of the National Council of Teachers of English.

Naheed: We have gotten quite a few nuanced and thoughtful reviews; I will quote an educator, who said: "Narrated in alternating chapters by the two seventh grade girls, FLYING OVER WATER is a powerful, uplifting, and eye-opening tale. In addition to Trump, a number of other real people and events from the Spring of 2017 are part of the story."

Jody: The book definitely seems to be striking a chord. I just read that Kirkus listed it as one of their favorite middle grade books of 2020. Congratulations! Before I let you both go, what are each of you working on now?

Naheed: I am currently working on a picture book. 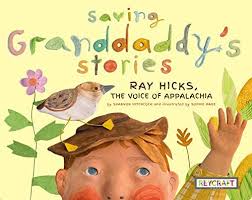 Shannon: I am at work on an Appalachian trilogy of picture books. The first Saving Granddaddy’s Stories—Ray Hicks, the Voice of Appalachia published on October 22nd and the next book, She Sang for the Mountains—Jean Ritchie, Singer, Songwriter, Activist will be published next year.

Jody: I'm very excited to check these out!

For more information about Naheed Senzai and Shannon Hitchcock:

And to purchase some of their books: