the church bells in my neighborhood ring, hymns that I recognize as I walk the dog or in summer when I'm sitting on the front porch reading a book. I don't go to church anymore. A million small reasons and some big ones, but church hymns aren't any of those reasons. I have always liked church hymns.

And the songs from that brief blip of time when I was in middle school at the parish school and to engage the kids at mass, the principal and kindergarten teacher teamed up to play guitar and bongos, encouraging us to sing loud and clap and sway in the pews,

instead of the normally somber mumble-singing of the old people. Some of those old ladies still wore hats from the time when women were supposed to wear hats, a sign of feminine obedience when entering a church. My mother told me that when she was a little girl, if they forgot their hat, they had to put a piece of tissue on their heads, which I thought was bizarre,

but then I thought a lot of things were bizarre about the church. The guitar and bongos went the way of the principal and kindergarten teacher, who rumor had it, were having an affair. I have no idea if this is true. They were both single women and they were best friends, and these facts alone, coupled with the wacky guitar-bongo thing they'd cooked up, kept the rumor mill busy.

The last time I entered a Catholic church, I got weepy. It was a church somewhere in New Mexico. My husband and I were on a meandery driving tour of the Southwest, heading toward Santa Fe from Taos. The guidebook said the dirt in el Santuario de Chimayo had healing properties and I wanted to see this for myself. A few years before I had been in the Basilica of Saint Anthony in Padua and had the same compulsion.

What is it about these churches, anyway? The weird mix of touristy gift shops and saint's bones displayed in glass cases, some people wandering around taking pictures and some people falling to their knees and bursting into tears and urgent prayers. In Padua you could write your intentions on a piece of paper, read the prayer to St. Anthony, helpfully included in dozens of languages on the back, and slip the paper into a box beside the crypt where his body is interred.

While my travel partner was sneaking illicit pictures (you weren't officially allowed), I stood in line for the crypt prayer and intentions. When it was my turn, the people beside me were praying in their different languages so earnestly, I was ashamed of myself. I won't tell you what I prayed for, except that it hasn't happened, yet, and before you can remind me,

I know this is a child's view of prayer, asking God for something you want and waiting for a response. Even when I was a child, I didn't quite believe it. Still, the New Mexico guidebook says you are allowed to take some of the healing dirt, and believer or no, I like to cover my bases, so I took an empty pill bottle

and waited for my turn into the small room by the altar where the magical dirt was. It was just ordinary looking sand, filling a hole in the ground in the center of the room, the size of a child's sandbox, which now that I think about it, someone would have to continually refill. People were standing around the perimeter looking at it somberly, while I knelt down and filled my bottle. Hands shaky and suddenly with that weepy feeling

whatever that feeling is called

that includes bells ringing in your neighborhood, bongos and tissues on little girls' heads, best friends hounded and kicked out of a community they loved, road trips with your husband, saint bones and sand. 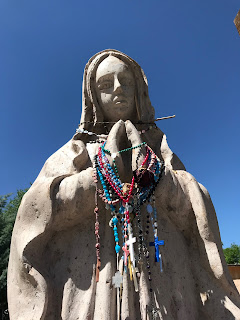