A friend knitted me a pink hat for the March. She couldn't go and she knew I was planning to. She wrote me a card. Please wear this for me, and I immediately burst into tears. We have a shared history of sexual assault, but that was in the past and we were over it, healed, we thought, but the new president's election brought it all back, fresh, his disdain for women, his mockery and bullying, and worse, and infinitely more painful,
-- all of these people cheering him on and turning a blind eye to it. I was back where I started, dazed and scared, angry too, which was a feeling I didn't have when I was a child being sexually assaulted. You know what? Let's call it rage. I was enraged. Honestly, I was a little scared of all of that rage.
I mean, where do you put it? How do you let it out, without hurting others? Because, let me tell you, the anger I felt when I saw that man brag about grabbing women by the pussy and then watched people I know, friends, family members, neighbors, shrug it off-- well, that rage had better go somewhere. I made a cardboard sign.
I cut it to look like a stop sign and I painted it red and pasted letters on in white: NO. I went to Washington with another friend. She was mad too. But the drive there felt more like a road trip.
Rest stops. McDonalds for lunch. We stayed with one of her friends on Capitol Hill. There were other women there, friends of the host. None of us knew each other but we all immediately clicked. No one had to explain to each other why we were there. In the morning I put the pink hat on, and the truth is, I felt a little silly.
I had never been to a protest rally before, unless you count this one time I went to the board of education, after the state of Ohio decided to cut funding for school librarians and I made a speech outside the building about how a librarian saved my life when I was a child. I was a nervous wreck that day because I had to speak through a megaphone.
This time I just had to walk around in public wearing a tightly fitted knit pink hat and waving a No sign. I could do that, damn it. The minute we stepped outside the house, it was a sea of pink hats. Crowds of people, mostly women, walking from every direction. They weren't screaming. They weren't carrying tiki torches (that would come later, for the aggrieved white men who like the idea of grabbing women by the pussies or kneeling on the necks of Black men and don't want to be called out for it) No,
the women were talking, laughing, moving toward the Capitol, a crowd so thick you could get lost in it, get squished in it, but I was never afraid. Which is interesting, when I think about it now, because several people--all trump supporters coincidentally--called me before I left to express fear, to tell me they were "thinking of me,"
which I laughed off, said, Don't worry, when what I wanted to tell them was F off, but I'll admit, there was a small doubt of What if they were right? What if the crowd did get out of control?
But there, in the thick of it, with people laughing and chatting and waiting in lines for the port-o-potties, the funny creative signs, the making of new friends, the picture snapping, and all of those absurd pink hats everywhere you looked, how could you be afraid?
In some moments you could even feel joy. There are more of us, I thought, and that was before I knew there were 500,000 people at the march. Millions of people rallying at the same time in cities all of the country, all over the world. Maybe we could all do something constructive with our rage?
I did. I learned my congressmen's names and state reps' names and phone numbers. And called them. A lot. I went to townhalls and wrote postcards reminding people to vote and wrote letters to the editor and went to more marches and canvassed neighborhoods for candidates and joined organizations to help fight back unfair laws, and voted, of course,
and all of those millions of pink hatted women combined with so many other people-- Black Lives Matter people (who, according to some of my now former friends and neighbors, have the audacity to say that Black people's lives matter), and scientists freaked out over Climate Change, and children terrified of being gunned down in school, and immigrants and refugees and gay people and trans people-- all of us standing up to say NO
to human rights abuses and corruption and fraud,
voted too. And the person we voted for won the election by 7 million votes.
So, if you find yourself on the other side of that, enraged, I hear you.
But don't carry your arsenal of guns to the statehouse to try to kidnap the governor or set up a gallows outside the Capitol so you can hang the Vice President or break through the barriers of the building and scratch your balls on the Speaker of the House's desk or beat a police officer to death with an American flag and then turn around and tell me it was nothing, let's all move past this for the sake of unity,
I heard that enough when I was a child, and this time I say what I couldn't say then
No. 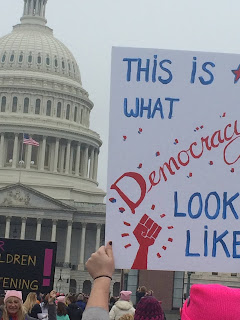