Dispatches from the Pre Post-Pandemic

The other day I was sitting at the library's information desk with a co-worker and we were talking about: is This the End of the World.
We had to keep breaking up our conversation to help patrons look for their reserve items and someone who needed to use the fax machine and didn't know how to use the fax machine. Also, the phone kept ringing and every other caller wanted to know if we had free Covid tests. We do, we would say when we answered the phone. But they're at our main library location. And hurry, because we keep running out.
Maybe every generation thinks it's the end of the world, I was saying to my co-worker. He's twenty years younger than I am and just had his first child and he seemed very resigned to the state of the world and I was trying to make him feel better, but then I would have to stop so I could look up if we had a certain book and he would have to stop so he could help someone who lost their library card.
But look at how things were in like, 1965, for example, I told him. We had political assassinations and the Vietnam War and battles over Civil Rights and--
a man came in who needed help signing onto a computer and somehow he got to talking about how he was a classically trained French chef but his goal in life was to recreate the perfect Coney dog sauce from his childhood and after twelve years of perfecting his recipe, he realized he had done it and now he wanted to open a Coney dog restaurant in town and could I please help him send an email.
The phone rang. My co-worker had been in eighth grade on 9/11 and his teacher told the class that the school didn't want them to keep the TVs on in the classroom but he was going to because This Was History happening in real time and all of the students needed to watch it.
And I understand, my co-worker said, because the teacher was right about history, but at the same time, we were in 8th grade and I still remember those people jumping off the buildings.
Maybe that's when things went off the rails, I said. 9/11. I was thinking of that night and how I stood for a while in my kids' bedrooms, one after the other, my little boy and my little girl, both sleeping peacefully, their rooms dark, and how my heart still hadn't stopped racing since 9:15 am that morning and what world was this that I had brought them into. What world would they grow up in?
Someone wanted a book recommendation for her grandchild and someone had just signed up for a new library card and someone wanted to pay a fine. But we don't have fines anymore, so please don't worry about it.
And what about Kent State, I said to my co-worker. That was awful. I mean, can you imagine kids walking to class and getting shot at by National Guardsmen? So, don't you think every generation thinks they're living in the end of the world, but they're not, and then we just go on?
I can see your point, he said. But what about Climate Change?
Oh, well, yeah, Climate Change, I said.
And then, there's the Pandemic, he said. He moved to take a sip of his water and lowered his mask and I suddenly remembered that he had a moustache.
It hit me that I was wearing a mask too and neither one of us had seen each other's faces in a year and a half and even though I knew that I had not made him feel better and I was not feeling any better myself, I started laughing. Maybe I laughed too hard, to be honest.
Then the phone rang. A harried mom came up to the desk and I checked her books out and gave each of her kids a sticker. I wish you could see how cute they were, those little kids, and how happy they were about their stickers. 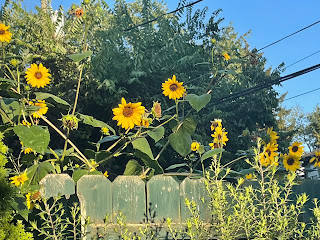