The part where the world is beautiful

He called us a few weeks ago to tell us his secret. He had a ring. He’d bought it a year ago and he’d been hiding it all this time, waiting for just the right moment. He was living in Germany. His girlfriend was living in London. Maybe he thought the summer would be the right moment. There were plans when she finished up her school work to travel together. Maybe Paris? But then the pandemic happened and the plans were put on hold.

I told them later it was like a scary movie. She was locking down in London, alone, afraid. Her father and I couldn’t get to her and how could she make it home? But what if he took the train from Germany and locked down with her? He had to go soon. There were rumors the borders would close any moment. The day he was traveling, she gave us updates. He’s out of the country. He’s crossing into England. He made it into London. He’s here!

She sent us a funny video. First day of Lockdown, the two of them dancing, singing out, Day One!

He worked from her apartment and she finished her schooling. He braved the grocery stores. They took daily walks in the park. When she did make it home several months later, he followed soon after, quarantining in our basement. She made the place up nice for him. One night he played his guitar and sang to her from the bottom of the basement stairs while she sat at the top of the stairs, teary-eyed.

We let him out of the basement and he was in our bubble. We walked the dogs and binge-watched TV shows and one day our daughter bought us all matching llama pajamas and none of us protested. Did I tell you he grew up in France? Did I tell you he is a gourmet cook? Oh my God, the meals we ate!

We risked our lives moving them into their new apartment and we were back to our quiet house and fending for ourselves with the meals and the llama pajamas.

And then there was the call about the ring.

Sometimes, okay, a lot of times, I write about how broken the world is. Maybe I slip in some happy moments about giving children stickers. Also, there are always flowers. But the other day I watched them walking up a sunlit street, hand in hand, smiling so widely at each other, and when she saw her father and me, she skipped toward us before breaking into a run.

The ring on her finger is beautiful. The world, my dear friends, is too. 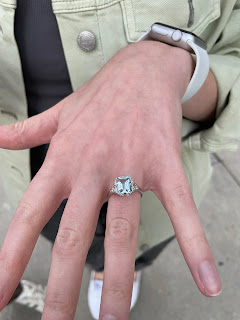