And Last but Not Least, I Would Like to Thank the Academy...

When you pursue the same dream for so many years, you have a looooong time to think about the things you'd like to do if/when the dream comes true. How will I spend my ginormous advance check is one such fun daydream. Or, which trendy NYC restaurant will I choose as the site of my celebratory lunch with my agent and editor? Or, what will I say to the hip teen actors hired to play parts in the blockbuster movie based on my novel?

Yeah, so those are some of the exciting things I haven't actually had to deal with yet (or probably, um, ever). But I have gotten to do some other fun things that previously I had only fantasized about it--like taking an author photo and seeing my book cover (before it was shot down by someone in marketing).

Lately, I've been consumed by what I should put on my acknowledgment page (or if I should even have one). One of the first things I do when I pick up a new book, is flip to the back and scroll through the author's acknowledgments. Before I had an agent, this was an important part of my submission process. Many authors thank their editors and agents in this section, and I'd dutifully record which writers were with which publishers and agencies. My theory was that if I liked the book--and if it seemed kinda like what I was trying to do, I'd have a potential lead on where to submit. This strategy actually got me across the threshold in a couple of places.

But I also like to read acknowledgments because they often provide a quirky little glimpse into the author's life. Oh, how sweet, she's thanking her husband for bringing home carryout every night so she could finish her book. Or, check out how important her critique group is to her or the public library system or the local coffee shop or double fudge ripple ice cream.

Sometimes the acknowledgments are simply a list of names; while some include an explanation of the person's importance. Some lists are long, going on for several pages. Others are short, just a couple of lines. It's cool when the thanks-yous are written in the same voice as the author. One hilarious example: Libba Bray's acknowledgment pages for Going Bovine, in which she thanks, among others, "everyone (she's) ever kissed or punched...the guy who validated (her) parking ticket...and the homeless lady who said (her) hair looked like dandelion with pieces blown away."

What all acknowledgment pages have in common is the realization that a book would not be what it is without the support and contribution of a lot of other people. When you've been writing and pursuing publication for so long, let me tell you, the list of helpers along the way is extensive.

I don't want to leave anyone out. But I also worry about drafting a ten page list of names that will make me sound like the make up lady at the Academy Awards who sways in front of the microphone going, And then I'd also like to thank Susie Jones Swanson who gave me my first lesson in blush application. Susie, thank you for being there (sniffle sniff) I love you so much, and next I'd like to thank--

Two contradictory things keep churning together in my mind when I think about writing my acknowledgments:

1. Having a book published is an amazing accomplishment and the people who helped me deserve to be recognized.

2. In the end it's just a book, so whoop dee doo. It doesn't contain the cure for cancer or the path to world peace. Truthfully, I'd just be happy if it gave a few readers like, three or four hours of entertainment on some rainy afternoon.

So this is pretty much where I am on the eve of writing my acknowledgment page.

Anyone out there want to weigh in? Pleeeeease? 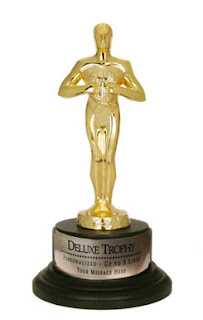