The Reality of Zooey


Two months ago if you asked anyone who knew me if I would ever get a dog, they would've emphatically said no. Let's just say I have never been a dog person. Possibly this dates back to me at age 12, in a moment of sheer idiocy, "kissing" my sleeping dog's face. Said dog reared back and bit a piece of my lip off. I had to get stitches. There was a gruesome scar for a while.

So yeah, I didn't really like dogs. When I visited friends who have them, I'd be cool, acting like I thought their dogs were cute, but inside I was cringing. Dogs kinda smell like, uh, dog. And I didn't like them jumping on me, or God forbid, licking-slash-drooling on me.

My fear/annoyance of dogs even inspired a story. It's called "Chasing the Rabbit" and it appeared in Cicada magazine a few years ago. First lines:

No offense to any dog lovers out there, but Abby didn't like dogs. She did, however, like the idea of dogs. In theory they seemed like good companions. Loyal. Loving. Obedient. Friendly.

But Abby (like me) learned fast about reality. Her new puppy bites her face (hmm, wonder where I got the idea for that?) and she comes to this conclusion: "It was the idea of dogs that had tricked her. Reality was different, and her scar would never let her forget it."

Not too long ago I actually dug this old issue of Cicada up and read this section to my daughter, who had been begging my husband and me for months to get her a dog. My daughter is very persistent, to put it mildly, when she gets an idea in her head, so I was growing worried that her crusade for a dog would eventually wear her father down. (This has happened before. See iPhone, new queen-sized bed, bigger bedroom, for previous examples of daughter's skill at breaking his will. Her tactics include mentioning the object of her desire several times per day, posting detailed lists of why she "needs" this object, and creating elaborate bargains with us.)

I waved my story at her and told her she didn't know the first thing about taking care of a dog--the reality of day to day life with a puppy. You have to take it for walks and clean up its piddle and poops, and wipe its muddy paws when it's raining. Nevermind the stuff it's going to get into--it'll eat your shoes! And anyway, it's going to be ME who takes care of the dog. Let's not kid ourselves here. I'm the one who's going to be home all day with it. I'm the one who's going to have to walk it and clean up after it and train it!

She just blinked at me. There she was sitting in her larger bedroom, on her queen sized bed. She stopped clicking on her iPhone, and said: Now that older brother has gone off to college, don't you think we, the three of us, should have a puppy, to help bind us together, in a new way, as a half-empty nest family?

Her name is Zooey.

Yes, it is true, everything I said about the reality of dogs. And it's true, too, for the most part, that I am the one who takes Zooey for walks and cleans up her accidental piddles. She smells like, uh, dog. She enjoys eating the corners of all of our rugs. She's spit up TWICE in the middle of the night in the middle of daughter's bed.

So it's all true, this reality I had been trying to explain to my daughter. But here is what I didn't know:

Oh, you just can't believe how adorable she is! She's got this sweet little wrinkly forehead and these precious floppy ears. (We got her from the pound and the vet thinks she might be some kind of pug/beagle mix) She follows me around and curls up next to me while I write. She cocks her head when I say something like she's really trying to understand what I'm talking about. And get this: I think she does. We have very intense conversations during the day when we take our multiple walks and I must explain to her that she can't eat the berries or the grass and she should just ignore that other dog's dried up poop in the middle of the sidewalk left behind by some %&^# owner who couldn't bother carrying a poop bag.

She is so smart too. I am not exaggerating. I know every dog parent probably says this, but in Zooey's case it is 100% true. She can sit, and shake paws, and let herself outside. And she can let herself back in too! She has only had three accidents and that was totally my fault for misreading her doggie clues.

During the day while I work on my writing, Zooey works on her latest bone project, carrying it around the yard, burying it, and digging it back up. At night she curls up on my lap and snores contentedly, every so often her eyes fluttering open to gaze up at me, that sweet wrinkled forehead of hers wrinkling up even more sweetly. She loves me. It is clear to everyone who sees us together.

Here is another reality: every morning when I wake up I have to walk past my college son's empty bedroom. It's always dark in there and always clean. Somehow I can brush right by. He's okay. He's happy. He's doing what he should be doing. And honestly, I can't worry about him every second of the day.

I've got a dog waiting downstairs for her breakfast. Not just any dog either. Zooey. 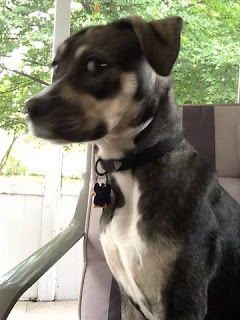 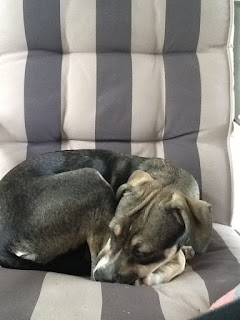